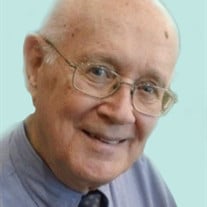 Joseph S. Lenkay, Sr. passed from this life into eternal life with our Father in heaven on May 13, 2021. Joe leaves behind a legacy of years of service to our country, to our city of Toledo, to his church community, and most of all, to his family. His example of steadfast and consistent love, discipline, patience, hard work, and humor will remain as inspiration in the hearts of all who knew him. Joe was born on May 25, 1926 to Louis A. and Mary B. Lenkay. An East-sider whose family heritage is Hungarian, Joe attended St. Stephen's for grade school. He worked paper routes for the Toledo Blade and the Blue Streak during the school year, and during the summer, assisted on local farms. Like his siblings, Joe attended Central Catholic High School, beginning a long tradition in his lineage of Irish graduates for generations to come. Joe graduated in 1944, after four years of balancing his studies with summer and after-school employment at Universal Glove, Save Electric, Willy's Motors, Pheasant Laundry, Feldman Bakery, and a bowling alley (where he set pins). After high school, Joe was accepted into the U.S. Merchant Marine Academy as a Midshipman. Joining at the height of America's WWII conflict with Japan, Joe served in two tours to the Pacific from 1944-45. On the first, his crew transported CBs to the Philippines, along with making stops at Pearl Harbor and Oahu. On the second transport, he brought CBs to Okinawa. Upon returning to the States, Joe completed advanced training at Kings Point College, graduating with his Bachelor's degree in Science in May 1947. He was commissioned as an Ensign, USNR and a 3rd Assistant Engineer in the Coast Guard. He was later honorably discharged from the US Navy and US Coast Guard. For the next several years (1947-51), Joe would make several trips as an engineer to Africa, Europe, and South America, advancing to 2nd Assistant Engineer in the process. Joe traveled to southwest, southern, and east Africa, bringing ore, grapes, and lobster tails back to the U.S. In Rio De Janeiro, he visited Sugarloaf Mountain and Christ of Andes. From the west coast of South America, Joe's crew brought a shipload of bananas and coffee, and from Sicily, a shipload of coal. He witnessed the Mau Mau uprising in East Africa, and a revolution in Peru. Once Joe's world-exploring days were behind him, he enrolled at the University of Toledo, then called TU, where he studied to become a mechanical engineer from 1950-54. His list of accomplishments as a Rocket include Vice President of Phi Kappa Chi, lab assistant, and part-time employee of Willy's Motors. As a director of the Junior Chamber of Commerce, Joe helped organize the Miss Toledo pageant and the first Toledo Ski Club (where he wrote the newsletters). He was also a staple member of the organization's softball and bowling teams. Joe went on to work for Standard Oil Ohio, Continental Aviation and Engineering, Haughton Elevator, and Reliance Electric before ending his career in the workforce as an engineer at BP. He retired in 1991, and could finally devote the time he wanted to his extensive list of hobbies. Joe loved to bowl, ski, garden, golf, build model ships, and fish. In fact, earlier in life, Joe caught an 8-foot shark in Mozambique. The catch was so big that the crew stopped swimming after having dove off the ship into the bay waters! Joe was also into sailing. He and a few of his friends owned "The Lightning," and then later on, got an old tub 34-footer "Leaky," named because it leaked a lot. They spent three weeks on Lake Huron, where they hit a storm and needed to bail buckets of water to survive! Many friends and family can tell stories of Joe's fishing and boating tales, and he was the perfect fisherman - extremely patient. Part of Joe's patient nature came from a long recovery after a plane crash in Canada in 1960 left him in serious condition. Joe's milestone life event in 1964 was his marriage (at St. Catherine's) to his beloved wife of 52 years, Joanne M. Dugan McHugh Lenkay. Joanne and Joe raised a beautiful family of six children and 14 grandchildren. Both Joe and Joanne were active members of their parish, St. Patrick of Heatherdowns, where Joe was a choir member and CCD teacher for 13 years. Joe is survived by his sister, Anne Gothier, brother-in-law, Glen Bollin, and sister-in-law, Suzanne Desmond; his children, Michael (Joanne), Anne, Joseph (Jennifer), Kathleen (Cleves Delp), and Suzanne (Dominic Spinazze); and his grandchildren, Zach (Nicole), Kelly (Adam West), Sarah (Duncan Forbes), Morgan, Sydney (JP Gurnee), Dugan, Maverick, Winston, Madison, Katelynn, Sophia, Isabella, Lucia, and Dominic. He is preceded in death by his wife, Joanne; parents, Louis and Mary Lenkay; brother, Louis; sisters, Mary, Mary Ann, Magdeline, Margaret, Carmelita, and Rose; his daughter, Mary Jo, and many others. Visitation will be at the Coyle Funeral Home, 1770 S. Reynolds Road, on Sunday, May 16th, from 2:00-7:00 p.m. with a Rosary service at 6:30 p.m. Funeral services will be held on Monday, May 17th, in the mortuary, beginning at 9:30 a.m. followed by a Funeral Mass at 10:00 a.m. at St. Patrick of Heatherdowns Church. Entombment will follow at Resurrection Cemetery. Face masks and social distancing will be required by the funeral home and the church. The family asks that donations be made to Central Catholic High School or St. Patrick of Heatherdowns. Please view and sign our online "guest registry" at CoyleFuneralHome.com

Joseph S. Lenkay, Sr. passed from this life into eternal life with our Father in heaven on May 13, 2021. Joe leaves behind a legacy of years of service to our country, to our city of Toledo, to his church community, and most of all, to his family.... View Obituary & Service Information

The family of Joseph S. Lenkay, Sr. created this Life Tributes page to make it easy to share your memories.

Send flowers to the Lenkay family.