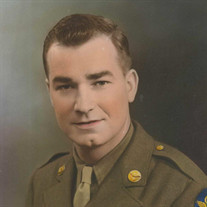 Joseph R. Kajtaniak, age 98, passed away under Hospice care after a long and full life. Born February 15, 1919 in Toledo, Ohio to parents Michael and Stella (Urbaniak) Kajtaniak, he was the youngest of 10 siblings. A child during the The Great Depression, he left school to work alongside his father at St. Stanislaus Church. A man of few words, he enjoyed a good laugh and loved to tease to get a smile out of people. Attending a birthday party as a young man he met the petite Irene Gutowski who would become his sweetheart. With World War II looming they married on May 24, 1941 and enjoyed 68 happy years together until her death in 2009. Joseph served in the Army Air Force from October 1942 until October 1945. He sailed to England on the Queen Elizabeth and was stationed in Debden Air Base near London for the remainder of the war. In recognition of his service he was sponsored in later years for the Honor Flight to the WWII memorial in Washington, D.C. Upon returning to Toledo he happily resumed his life with Irene and soon to be family. Self-taught from library books and manuals he built a wonderful home for his young family. He worked at Gerity-Schultz Corp. for over 40 years. Weekends were spent with brother-in-law Bill completing projects together or with son Dennis working on their cars. Inventive and tenacious, Dad was always up for a good challenge in getting things to work. The summer was cottage time where he loved teaching his kids and grandkids how to swim, water-ski, sail and fish. The highlight of winter for Joe and Irene was their Florida vacations with Mart and Orv in Fort Myers Beach. In retirement he enjoyed golfing and fishing with brothers-in-law Bill and Richard along with helping out his kids. Screening-in porches, painting rooms, installing car brakes, wiring, plumbing, you name it, Dad was there for us! He also found that he loved to sew; boat covers, awnings, and car seats were just a few of his completed projects. Lastly, sometimes to Irene’s dismay, he took to cooking and canning in her kitchen domain. He was a former member of St. Jude Church and current member of Little Flower Church. A strong, hard-working and kind man he was aptly named after St. Joseph. Resourceful, witty, humble, generous, fun-loving, happy and loyal were words given by his grandchildren to describe him. Some people are all talk and no action, Dad was all action and little talk. His legacy is his love of family and willingness to help people. Our Dad, 98 years old, enjoyed a long life so well-lived. We will miss your presence in our lives…love you. Joseph was preceded in death by his parents; brothers, Frank, John, and Anthony Kajtaniak; sisters, Helen Kajtaniak, Martha Heil, Margie Gozdowski, Stella Bagrowski, Mary Filipski and Pearl Puszczewicz; and granddaughter Elizabeth Conklin. He is survived by his children, Dennis (Kathy) Kajtaniak, Susan (George) Conklin, Karen (Michael) Kontak and grandchildren, Aaron (Lorrie), David (Tara), Lisa (Andrew), Geoff (Ali), Marissa (Will), Joe and Mike; and 6 great-grandchildren. He will be remembered by many special nieces, nephews, and brother-in-law and sister-in-law Richard and Kathy Gutowski. Friends may visit at the Coyle Funeral Home, 1770 S. Reynolds Rd., on Friday, January 12th from 4-8 p.m. Funeral services will be held on Saturday, January 13th beginning at 9:15 a.m., in the mortuary, followed by a Funeral Mass at Little Flower Church at 10 a.m. Interment Resurrection Cemetery.

Joseph R. Kajtaniak, age 98, passed away under Hospice care after a long and full life. Born February 15, 1919 in Toledo, Ohio to parents Michael and Stella (Urbaniak) Kajtaniak, he was the youngest of 10 siblings. A child during the The Great... View Obituary & Service Information

The family of Joseph Raymond Kajtaniak created this Life Tributes page to make it easy to share your memories.

Joseph R. Kajtaniak, age 98, passed away under Hospice care after...

Send flowers to the Kajtaniak family.