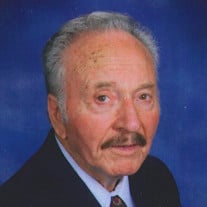 Jose G. Romo, 87 of Maumee, passed away Thursday, February 14, 2019 at Hospice of Northwest Ohio. He was born in Taylor Texas on March 18, 1931 to Francisco and Maria Romo. He moved to Toledo when he was 16 years old as a migrant worker and later was employed by the Jeep Corporation, where he retired after 30 years. He met the love of his life, Nancy Duran. They dedicated their lives to one another in marriage for 65 years. After attending a Crusillo in Texas, Jose eventually brought the Crusillo Movement to Toledo, where it flourished and led to other ministries such as Marriage Encounter, Bible studies, Prison Ministry Crusillo, and Ministering at Migrant Camps. Jose also ministered through the love of his music. Jose and Jimmy Campos were ordained the first permanent Deacons in the Diocese of Toledo, on September 17, 1973. His children, grandchildren and great-grandchildren were the light of his life with whom he enjoyed traveling, boating, camping and fishing. He is survived by his loving wife Nancy; children Elias Romo, Diana (Rafael) Angel, Susan (Eduardo) Belmares, Michael (Chris) Romo and Ana (Robert) Modrowski; grandchildren Maricela, Rafael ll, Nichole, Ellaina, Liza, Viviana, Sara, Hunter and Faith; great-grandchildren, Paulo, Alan, Rafael lll, Diana, Emily, Emiliano and Camila. He was preceded in death by his parents, daughter Maricela, brothers Jesus, Aurelio and Elias and sisters Eloisa and Amalia. Visitation will be held at the Coyle Funeral Home, 1770 S. Reynolds Rd. on Tuesday, February 19, 2019 from 2-8 p.m. where a Scripture Service will be held at 6:30 p.m. followed by recitation of the Rosary. Funeral services will be held on Wednesday, February 20th beginning at 10 a.m. in the mortuary followed by the Funeral Mass at Our Lady, Queen of the Most Holy Rosary Cathedral at 11 a.m. with the Most Reverend Daniel E. Thomas, Bishop of Toledo as the principal celebrant. Interment will follow at Lake Township Cemetery. Memorials may take the form of contributions to Hospice of Northwest Ohio or to the Alzheimer’s Association. Please view and sign the guest registry at coylefuneralhome.com.

Jose G. Romo, 87 of Maumee, passed away Thursday, February 14, 2019 at Hospice of Northwest Ohio. He was born in Taylor Texas on March 18, 1931 to Francisco and Maria Romo. He moved to Toledo when he was 16 years old as a migrant worker and... View Obituary & Service Information

The family of Jose G Romo created this Life Tributes page to make it easy to share your memories.

Send flowers to the Romo family.