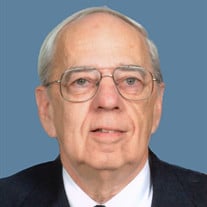 John F. Tillman, Sr., age 87, of Maumee, OH passed away peacefully at home on June 7, 2022, surrounded by his family. He was born on February 28, 1935 to George A. Sr. and Hildegarde (Woelfle) Tillman in Toledo, OH. He graduated from Central Catholic High School in 1953. After 12 years of night school at the University of Toledo, he graduated in 1965 with a B.S. in Chemistry. He went to work for Owens-Illinois in 1955 as an analytical chemist. He worked his way up to Senior Chemist (group leader) retiring in 1992. He also worked for Glass Container Division, responsible for raw material quality and glass chemistry and glass color. After retirement, he worked part time for Monarch Laboratories, West Pharmaceutical and American Glass Research until age 85. He was a past member of the American Chemical Society and Research Society of America. He co-authored several published papers on analytical chemistry. John enjoyed spending time with his family for yearly bowling tournaments and family gatherings at the lake. He loved to play cribbage and other card games. John was very devoted to his faith and was a leader of many rosary groups at St. Joseph's Toledo, St. Joseph's Maumee and St. Patrick of Heatherdowns. John married Mary Jo Leahey in 1957 and together they raised six children, Diane (John) Whelton, Julie Tillman, John, Jr. (Brenda), Susan (Jeff) Klein, Caroline (Scott) Hofmann and Gretchen (Ardy) Holloway. He was preceded in death by his parents, his wife, Mary Jo of 56 years, and brother George A. Tillman, Jr. He is survived by brothers James (Bernice) Tillman, Paul (Patricia) Tillman, David (Janet) Tillman and sister Mary Ann Zeller. He is also survived by 18 grandchildren, 8 great-grandchildren and many nieces and nephews and friends. John would be happy to know that Masses were said for the repose of his soul. In lieu of gifts, please consider having Masses said for John. Donations can be also be made in John's memory to the Ability Center and Hospice of Northwest Ohio or the charity of your choice. Special thanks to Hospice Aids and Nurses, Lynn Huepenbecker, Stacy Bennett and Michael Zeller. Friends may visit at Coyle Funeral Home, 1770 S. Reynolds Rd. on Sunday, June 12 from 2-8 p.m. with a Rosary service at 7 p.m. The funeral will begin at Coyle on Monday, June 13 at 9:30 a.m. followed by Mass at St. Patrick of Heatherdowns at 10 a.m. Burial will be at Calvary Cemetery. Please view John's video tribute and leave a condolence message at CoyleFuneralHome.com.

John F. Tillman, Sr., age 87, of Maumee, OH passed away peacefully at home on June 7, 2022, surrounded by his family. He was born on February 28, 1935 to George A. Sr. and Hildegarde (Woelfle) Tillman in Toledo, OH. He graduated from Central... View Obituary & Service Information

The family of John Tillman created this Life Tributes page to make it easy to share your memories.

Send flowers to the Tillman family.