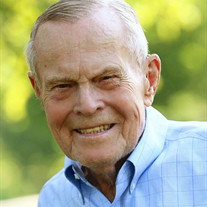 John Leonard Mason died September 3, 2018 in Waterville, OH after some months of failing health. He was born February 26, 1931 in Upper Sandusky, OH to Harold L. and Helen (Cox) Mason. John attended Ohio Wesleyan University and earned advanced degrees in Marketing from Indiana University. He served two years in the US Air Force, and worked briefly for General Electric before beginning a teaching career at the University of Toledo in 1960. John taught 14 years and also served as Dean of the College of Business. In 1974 he joined Peoples Savings Association serving as Vice President and President. While a Senior at Ohio Wesleyan, John met, dated, and in the following year, married Anne Lepley, his true love. They were married for 64 years before Anne preceded John in death April 19 of this year. John and Anne lived a busy, exciting life working and traveling to the Caribbean, Europe, Africa and the Holy Land. They enjoyed camping in a 5th wheel camper all through the United States and loved America’s national parks. They also loved visiting family and seeing their four grandchildren. Both John and Anne played tennis on a regular basis for many years until their health prevented them. In his mid-seventies John describes an epiphany or realization that he became a born again Christian. He said that it was a liberating experience to know that while he was imperfect, God in His grace, died for him and forgave him his sin and helped him live the life He had called him to. He said that he knew with proof beyond a doubt, that Christ is the Son of God and my personal Savior. John is survived by his son, John R. Mason, Cincinnati OH, daughter, Jennifer L. Rossol (Martin), Waterville OH; grandchildren Joel M. Rossol, Cincinnati OH, Emily Joy Donald (Christopher), Sydney AUS, Mark S. Rossol (Klaudia), Waterville OH, and Evelyn G. Rossol, Kent OH; by two great grandchildren, Trace and Clemency; by brothers, Jim (Linda) Mason, Dave (Marcina) Mason, and sisters Cathy (Harry) Keller and Mary (Tom) Droessler. The family is appreciative of Grace Hospice of Maumee, and nurse Crystal who cared for John the night he died. Friends may visit at the Coyle Funeral Home, 1770 S. Reynolds Rd. on Sunday, September 9 from 3-6 p.m. The funeral will be held on Monday, September 10 at 11:00 a.m. with an hour of visitation beginning at 10 at Waterville United Methodist Church, 102 N. Fifth St. Burial will be at Toledo Memorial Park. Memorial donations may be given to Waterville United Methodist Church. Please leave a condolence message at CoyleFuneralHome.com.

The family of John Leonard Mason created this Life Tributes page to make it easy to share your memories.

Send flowers to the Mason family.