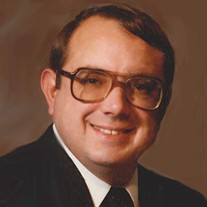 To view a recording of John's Funeral Mass from 12/12/2020 please CLICK HERE to be directed to the video. John C. Mackley, Jr., age 75, of Perrysburg, Ohio passed away December 8, 2020 at McLaren St. Luke's Hospital with his family at his side, ending his years-long struggle with COPD. John was born June 29, 1945 in Ann Arbor, Michigan to John C. Mackley, Sr. and Barbara (Sneider) Mackley, the second of their five children. His family moved to Toledo, Ohio where John attended Ladyfield School, St. Francis de Sales High School, and the University of Toledo. He also spent a 60-day trial run at St. Meinrad Seminary and decided he could not commit to the priesthood. John was a businessman, served 26 years in sales and as Secretary/Treasurer of Marleau Hercules Fence Company and 16 years with Better Living Homes of Addison, Michigan. He married Ann Schira in 1965, and they raised their family of four children at OLPH parish, Toledo. John was an active participant at OLPH, serving as Parish Council President, PAL Retreat leader, reader and communion distributor, and made many friends and memories through his years there. John celebrated his 50th anniversary in AA with family and friends as the pandemic appeared. He found strength in the wisdom of Bill W. and his fellow-members gave him lasting support. In 1975 a neighbor invited him to join the Maumee River Yacht Club. He and his family enjoyed many years with friends on the waters of the mighty Maumee, Lake Erie, and Devils Lake, his favorite place. In retirement, John kept busy as a part-time employee of Black and White Transportation and served as a dispatcher for their Bowling Green, Ohio territory. In addition to Ann, he is survived by son Timothy C. Mackley (Cynthia), daughters Colleen Mankowski (Michael), Karen Mackley-Weber (Scott), and Kristi Ott, Grandchildren Jocelyn Walker (Corbin), Reid Mankowski (Hannah), Drew Mankowski, Kelsey Mackley, Madison Ott, Olivia Weber, Kailey Mackley, Trinity Swanson, and Great-Granddaughters Alexandra Noel Walker and her baby sister due in April. Also surviving are sister Lynn K. Mackley and brother James J. Mackley (Janice), and numerous nieces and nephews. He was preceded in death by his parents, sisters Maureen A. Hoover and Ann M. Fonk, and by Granddaughter Noel A. Mankowski. The family wishes to thank the medical staff of McLaren St. Luke's Hospital, especially John's charge nurses Olivia, Malissa, and Ronda for their tireless care of his needs during his last days on earth. Visitation will be held at the Coyle Funeral Home, 1770 S. Reynolds Rd., on Saturday December 12, 2020 from 11:00 a.m. -12:30 p.m. The funeral mass will take place at Our Lady of Perpetual Help Church beginning at 1:00 p.m. Interment will be private. Contributions can be made to Our Lady of Perpetual Help Parish, Toledo, and the Toledo Northwestern Ohio Food Bank. Please view and sign the guest registry at coylefuneralhome.com.

The family of John Charles Mackley, Jr. created this Life Tributes page to make it easy to share your memories.

Send flowers to the Mackley family.