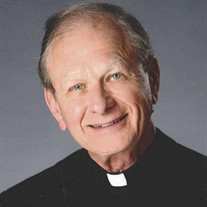 Rev. John J. Lehner O.S.F.S., an Oblate of St. Francis de Sales for 59 years and a priest for 51years died peacefully on Sunday evening December 26, 2021 at the Rosary Care Center in Sylvania Ohio. Father had been diagnosed with pancreatic cancer earlier in the year. John Joseph Lehner, the son of the late John and Mary (Keenan) Lehner was born on April 16, 1942 in Rochester New York. In addition to the members of his Oblate community he is survived by his brother, Dr. Jim (Peggy) Lehner of Kettering Ohio and six sisters, Margaret "Marge" (the late Terry) Leazer of Sylvania Ohio; Anne (Con) Nolan and Rose (Loras) Sleve of Edina Minnesota; Joan Connors (Dan Burns) of Maumee Ohio; Sue (the late Bruce) Wells of Eastchester New York, Ellen (Doug) Porter of Lakewood Colorado, and many nieces, nephews, grand-nieces and grand nephews. The Lehner family moved to Indiana and then to Toledo Ohio and John graduated from St. Francis de Sales High School in May of 1960. He completed his first year of college at Notre Dame University before entering the Oblates of St. Francis de Sales. He made his first Profession of Vows on August 21st of 1962, his final Profession of Vows on September 25th, 1965 and was ordained a priest on September 12th 1970. Father earned a B.S. degree in Mathematics and Philosophy from Niagara University in 1967, a M.A in Mathematics from the University of Detroit in 1972 and an M.A. in Theology from DeSales School of Theology in 1973, a Basic CPE Unit in 1986 and he studied Spanish as part of a sabbatical program at the Mexican-American Cultural Center in 2010. Following his ordination, he began his ministry as a teacher first at Bishop Duffy/ Niagara Catholic High School in Niagara Falls New York from 1971-1980. From there he went to Judge Memorial Catholic High School in Salt Lake City Utah from 1980-1984. From 1984-1991 he served his community as a member of the Formation Team as the Novice Master. From 1991-2003 he served in parish ministry first at St. Regis in Birmingham Michigan and then as Pastor of St. Kevin/St. Norbert in Inkster Michigan. In 2003 he returned to his alma Mater St. Francis de Sales School Toledo where he served as local Superior, a member of the teaching faculty, school chaplain, chaplain to the Chappuis Society (the Mothers Club) and chaplain to the Swim Team. In 2010 he came to St. Pius X Toledo as part-time Assistant while continuing his various chaplaincies at St. Francis as well as his participation in Cursillo, Teams of our Lady and the Daughters of St. Francis de Sales in Michigan. Father had a special care and gift for ministering to the sick and housebound. As a member of the Spiritual Life Team of St. Pius X he visited and brought the sacraments as well a special Christmas gift to many of the homebound. A visitation will be held on Monday, January 3, 2022 at St. Pius X Church, 2950 Ilger Ave., Toledo, OH 43606, from 3:00-7:00 p.m. where a Prayer service will be held at 7:00 p.m. A Funeral Mass will be held on January 4, 2022 at Gesu Church, 2049 Parkside Blvd., Toledo, OH 43607, at 11:00 a.m. where there will be a visitation beginning at 10:00 a.m. Internment will immediately follow the Funeral Mass at Resurrection Cemetery. Please view and sign our online "guest registry" at CoyleFuneralHome.com

Rev. John J. Lehner O.S.F.S., an Oblate of St. Francis de Sales for 59 years and a priest for 51years died peacefully on Sunday evening December 26, 2021 at the Rosary Care Center in Sylvania Ohio. Father had been diagnosed with pancreatic... View Obituary & Service Information

The family of John Joseph Lehner, OSFS created this Life Tributes page to make it easy to share your memories.

Send flowers to the Lehner family.