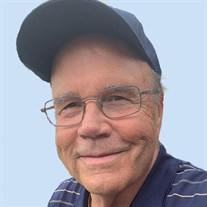 John Francis Kerscher died peacefully, holding hands with his wife, Cathy, in Ann Arbor VA Hospital on November 13th a few hours after a Zoom call with his children and grandchildren. John was born January 18, 1943, in St. Vincent’s Hospital in Toledo, Ohio to Francis X. and Marie C. Kerscher. He had an idyllic childhood in South Toledo where he and his 3 brothers roamed the ravine behind their home, played hockey on the Maumee River and explored the islands near the shore. He graduated from St. Francis de Sales High School in 1961 and attended the University of Toledo. In 1963, he enlisted in the U.S. Air Force, training at Lowry AFB in weapon systems & repair of Sidewinder missile controls and then serving a tour in Vietnam in 1966 repairing those systems on F-4 Phantom jets. In 1964, he met his loving wife, Cathy (Powell) Kerscher at Mac Dill AFB in Tampa, Florida. They were married June 24, 1967. After John left the Air Force in 1970, he returned to the University of Toledo and completed his degree in Mechanical Engineering while working at Johns-Manville as a technician. He tested the heat resistance of fiberglass tiles that Dominick Labino developed for the Space Shuttle. After graduation from the University of Toledo, he was promoted to automotive engineer, designing and testing fiberglass sound proofing for several automotive companies. John was passionate about many things with his family topping the list. He coached in Anthony Wayne Youth Soccer League and St. Joe’s CYO Basketball and Football. He eventually helped introduce soccer as a varsity sport at Notre Dame Academy and coached there for 5 years. Many of those young people reached out to thank him after they became adults for his leadership and for making practices fun and teaching them the importance of fair play and working with a team. He was a lifelong fan of University of Notre Dame, University of Toledo, Notre Dame Academy and St. Francis de Sales High School. He enjoyed attending many sporting events, especially those in which his children participated. He and Cathy enjoyed traveling throughout the US and in Europe and Australia. After his retirement from Johns-Mainville in 2003, John volunteered as a poll worker in Lucas County until 2019. Woodworking was a hobby John began to take more seriously after his retirement, joining with a group of men at St. Joseph Church, Maumee, to build many projects for the church and school. He was most proud of the altar that he helped design and build for Fr. Nathan Cromly’s Chapel in Colorado. He will be fondly remembered by all family and friends for his beautiful smile, sharp wit and wicked sense of humor and his devotion to God, family and country. John was preceded in death by his parents, Francis X. & Marie C. Kerscher, and his infant granddaughter, Caroline Keneally. He is survived by Cathy, his loving wife of 53 years, his daughter, Kristina (Ben) Keneally of Sydney, Australia, his sons Kevin (Gwynne) Kerscher of Hilt, California and Jeff Kerscher of Seattle, Washington and his four grandchildren, Daniel and Brendan Keneally and Kane and Cassie Kerscher. He is also survived by his brothers Dan (Margo) Kerscher and Ken (Marie) Kerscher of Toledo and Mike (Sue) Kerscher of Cincinnati, Ohio and 11 nieces and nephews and many great-nieces and nephews. Due to the current rise in COVID 19, there will be no visitation and the Funeral Mass at St. Joseph Church will be private for family members only. However, the Mass will be live streamed on the Facebook page, St.Joseph Parish,Maumee at 10:30 AM on Friday, November 20th. A Memorial Mass and a Celebration of Life will occur at a later date. In lieu of flowers, memorials may be given to St. Francis de Sales High School, 2323 W. Bancroft St., Toledo, Ohio 43607 or to St. Joseph Catholic Church, 104 W. Broadway, Maumee, Ohio 43537. Please view the online guest registry at CoyleFuneralHome.com

The family of John Francis Kerscher created this Life Tributes page to make it easy to share your memories.

Send flowers to the Kerscher family.