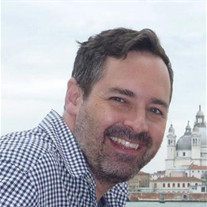 John C. Kelleher, III, MD 1970-2020 John died peacefully on the morning of January 26, 2020, surrounded by his family in West Hollywood, California. He was 49. Born in Dallas, Texas, December 9, 1970 – his paternal grandmother’s 50th birthday – John touched many lives throughout his lifetime in all the places he lived: Dallas, TX; Toledo, OH; Amarillo, TX; Providence, RI; Nagoya, Japan; New York City, NY; and Los Angeles, CA. Those who were fortunate to know John, loved him deeply. John demonstrated a genuine kindness and compassion for every person he encountered. His ever-gracious demeanor garnered him friendships wherever he went. Even in his last days he was fist bumping doctors, complimenting a nurse on her earrings, and offering friends and visitors food and drink. Brain cancer robbed John of his language, but not his uncanny ability to make a person feel special and loved. His smile was endearing, laugh infectious, and silliness adored. John was a dedicated actor, director, singer, dancer, cellist, and pianist. He played Linus, Snoopy, Little John, and countless other memorable parts at the Amarillo Little Theater when he was young. He later studied at the Neighborhood Playhouse in New York City. He played the cello at his sister’s wedding. He was the Nutcracker Prince in Amarillo. He was a waiter, serving seafood towers for many years at Balthazar in New York City. He was a reader, art lover, traveler, and knitter. He was a consummate host. He was a perpetual student. John graduated from Brown University in 1993 with a Bachelor of Arts in Art History and East Asian Studies, studied abroad in Nagoya, Japan, and was fluent in Japanese. He studied medicine, also at Brown, with an emphasis on psychiatry, and completed his residency in psychiatry at UCLA. So that he could deepen his understanding of the mind and further help his patients, John was in the process of completing his psychoanalytic training at The New Center for Psychoanalysis in Los Angeles when he was diagnosed with a malignant brain tumor. John was renowned by his colleagues for his kindness and compassion, and ability to treat difficult patients. His patients called him their friend. He was a cherished friend, son, and brother. He was Greg's dear husband. He was Phoebe’s ever-loving Papa. While this is the end to a truly extraordinary life, it is not the end of his legacy. John will live in all of us in the ways he impacted us, and in ourhearts, minds and souls. John is survived by his loving husband, Greg Okin, and his adventurous beautiful daughter, Phoebe Okin-Kelleher, of Los Angeles, CA; his parents, John and Cindy Kelleher of Amarillo, TX and Vail, CO; his siblings, Kristin Danford and husband Scott, (children Henry and Kelly) of Englewood, CO, Brian Kelleher and wife Amanda (children Deaven, Callie and Brenna) of Amarillo, TX, and Brooke Cozort and husband Craig (children Owen and Margaret) of Littleton, CO; and his grandmother who shares his birthday, Rose Mary Kelleher, of Toledo, OH. His uncles; Robert (Patti), Marblehead, OH, Kevin (Lesa), Bozeman, MT and David (Terri) Kelleher, Red Lodge, MT, Brooke (Isabel) Leiphart, Sun Valley, ID aunts; Mary (Doug) Arnold, Fairfield, IA and Kristin (Kevin) Wong, El Macero, CA He was preceded in death by his grandfather John C. Kelleher, Sr. MD, and grandparents E. Henry and Harriet Leiphart, also of Toledo, OH and Naples, FL. uncles, Michael (Debbie) Kelleher and Terry (Leslie) Leiphart, aunts, Kathy (Joe) Scalzo, and Rose Mary (Brooks) Albery. A celebration of John’s life will be held in Amarillo, Texas at Boxwell Brothers Funeral Home at 4pm on Sunday, February 16, 2020. A service will also be held in Los Angeles, California at a future date, to be determined. In lieu of flowers, the family requests that you consider a donation to the LA Gay and Lesbian Center (https:// donate.lalgbtcenter.org/), Amarillo Little Theater, Heal the City Free Clinic of Amarillo, Amarillo College Conservatory Theater, or a charity of your choice. We would like to thank everyone for all the care, concern and love. John certainly deserved and inspired devotion. He was just so easy to love.

The family of John C Kelleher, III MD created this Life Tributes page to make it easy to share your memories.