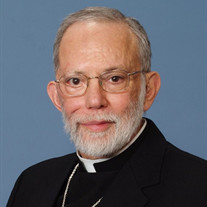 For an updated recording of the Funeral Mass for Father John Garden please CLICK HERE and you will be directed to a recording of the service. Father John L. Graden, an Oblate of St. Francis de Sales since 1966, and a Roman Catholic priest since 1976, died on January 20, 2021, in Buffalo, NY. He was 74 years old. In addition to his many confreres in the Oblates, he is survived by his siblings, Jeanne, Joseph (Mary Pat) and Mary Jo (Hilary); many nieces, nephews and cousins. John was pre-deceased by his grandparents, Joseph and Lilly Haddad and John F. and Pearl Graden, his parents John L., and Dorothy Graden and his half-sister Ethel Arobogast. St. Francis de Sales had claim on Father John for a long time. In Toledo he attended St. Francis de Sales Parish, St. Francis de Sales Grade School (1952) and St. Francis de Sales High School (1964) after which he joined the Oblates of St. Francis de Sales. John attended Niagara University (BS in biology, 1969), the University of St. Michael's College in Toronto (Masters of Divinity, 1975), and Seattle University (Masters in Religious Education, 1977). His work and ministry included teaching high school at Bishop Duffy HS in Niagara Falls, NY, Toledo Central Catholic HS in Toledo, OH, and St. Francis de Sales HS in Toledo, OH. He was the Vocation Director for the Oblates and a member of the Formation Team. In 1988 John formed WORD Consultants (Toledo) as a teaching firm in which he and others would provide adults education and training, as well as parish missions and retreats. He also worked for many years for UNBOUND preaching for Catholic missions around the world. In 2002 John became the Director of the De Sales Center at Stella Niagara, NY, now known as Embraced by God at De Sales Resources and Ministries. People have said how they will miss his preaching and presiding at Eucharist, his crooked smile and hearty laugh. At various stages of his life John dealt with many health issues and learned from Francis de Sales to see even sickness as a prayer of communing with Christ Jesus. Funeral services will be held on Thursday, January 28 at Gesu Parish in Toledo, OH. Viewing will begin at 10:00 a.m., in the church, followed by a mass of the resurrection at 11:00 a.m., then internment at Resurrection Cemetery in Toledo, OH. The Funeral Mass will be Livestreamed for those who do not wish to attend in person. If you wish to view the Mass via Livestream please scroll to the bottom of the the obituary to click on the link to attend. There will be a memorial mass at St. Peter's Parish in Lewiston, NY at a later date. At John's request, contributions in his memory may be made to the Oblates of St. Francis de Sales, P.O Box 2868, Toledo, OH 43606, Embraced by God, 4421 Lower River Rd., Stella Niagara, NY 14144, or any good works of your choice. Condolences may be sent to John's brother: Joe Graden, 2440 Whitechapel Dr., Toledo, OH 43614. Due to COVID restrictions there will be no social gathering following the funeral. A celebration of John's life will take place this summer at the home of John's family. Date, time and location to be determined. Due to current conditions caused by the ongoing pandemic, we are offering a Live Stream of the Funeral Mass for Father John L. Graden beginning at 10:45am on Thursday, January 28, 2021 for those who wish to attend the Mass virtually. Please view and sign our online "guest registry" at CoyleFuneralhome.com

For an updated recording of the Funeral Mass for Father John Garden please [CLICK HERE]https://vimeo.com/508618446 and you will be directed to a recording of the service. Father John L. Graden, an Oblate of St. Francis de Sales since 1966,... View Obituary & Service Information

The family of Father John L. Graden O.S.F.S. created this Life Tributes page to make it easy to share your memories.

For an updated recording of the Funeral Mass for Father John...

Send flowers to the Graden family.