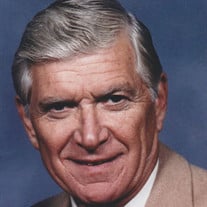 John "Jack" E. Florian (1928-2021) John "Jack" Florian of Toledo, Ohio passed away peacefully at the age of 93 on February 9, 2021. His long time wish was to be at home with his wife during his final days and that gift was granted, which was a great comfort to our family. Jack was born January 4th, 1928 to Carl and Edith Florian in Toledo, Ohio. He attended Central Catholic High School where he played Varsity basketball and then furthered his education at the University of Toledo where he played on the Freshman basketball team. Jack went on to play many years in the CYO and TCCY Leagues for OLPH and St. Anne's Parish, winning many titles. Jack endlessly told the story about the moment he saw Arlene (Petrie). He knew in an instant that he was going to marry her. From that day forward, until the day he left this Earth he did everything in his power to love her, care for her, and protect her. His endearing love for her was witnessed by their eight children, 15 grandchildren, and 21 great grandchildren. Jack and Arlene were married for 70 years. For over sixty years, Jack proudly carried on the family name at The Florian Insurance Agency. The agency was started by his grandfather, Edward A. Florian, in 1907 and during his time there he helped transition the agency into its fourth and fifth generation. Most of his career was spent working alongside his sons, Tom and Gary. Jack had a way of turning customers into friends and longed for each and every one of them to be taken care of the old-fashioned way. Jack enjoyed golf, tennis, playing cards, magic, and in his later years he was especially skillful at corn hole. He loved playing, coaching, and watching sports all the same. Basketball was his favorite! He coached his kids at OLPH for many years, later became the school Sports Director, and was awarded the CYO Adult Contributor Award in 1978. After sending five boys through the St. Johns basketball program, he became a lifelong fan. For fifty years he rarely missed a game! He was later honored for this by the school. Jack was a member of St. Joan of Arc Parish where he regularly attended mass with his wife on Sunday mornings. Together, they volunteered their time at St. Vincent de Paul Society where he became the President and Treasurer for sixteen years. Jack also was a charter member of the Knights of Columbus. He was also a Former member of Heatherdowns Country Club and Laurel Hill Tennis Club. Jack took great pleasure in playing in ping-pong matches with his friends and family. In his eighties, he even won gold medals in three Senior Olympic table tennis tournaments. Jack had a way of lighting up a room with his blue eyes and bright smile. He encouraged his kids and grandkids to do big things and was always proud to hear of their endeavors. We will dearly miss his love of life, his enjoyment in the little things (taking his dogs out for ice cream and hot dogs), and his care for his family. That is when he was truly happy! Jack is survived by his wife, Arlene Florian; his children, Gary (Janet) Florian, Vicki (Allan Schnerson), Jeanne (Larry) Loehrke, Janet (Randy) Koschalk, John (Beth Stock) Florian, James (Linda) Florian, Thomas (Karen) Florian, Jeff (Shazmah Hakim) Florian; grandchildren, Mark Florian, Gregory (Sara) Florian, Nicole (Jeff) Hopkins, Kurt Koschalk, Kyle (Ines) Koschalk, Sean Florian, Chris Florian, Stephanie (Jason) Connell, Erica (Jacob) McVicker, Sarah (Michael) Iceman, Emily (Jared) Parseghian, Allison (Zachary) MacQueen, Ayla Florian, Ali Florian, Asim Florian; and twenty-one great grandchildren. We want to be sure to extend our sincere gratitude to the many aides that helped allow him to remain at home during his final months, weeks, and days. Visitation and services at Coyle Funeral Home will be private for the family. A celebration of his life will be held at a later date. Burial will be at Riverside Cemetery. In lieu of flowers, memorial contributions can be made to the Society of St. Vincent de Paul Toledo (St. Joan of Arc). Checks can be made payable to St. Vincent de Paul and mailed to 5856 Heatherdowns Blvd, Toledo, OH 43614. Please leave a condolence message for the family at CoyleFuneralHome.com.

John "Jack" E. Florian (1928-2021) John "Jack" Florian of Toledo, Ohio passed away peacefully at the age of 93 on February 9, 2021. His long time wish was to be at home with his wife during his final days and that gift was granted, which was... View Obituary & Service Information

The family of John "Jack" Florian created this Life Tributes page to make it easy to share your memories.

Send flowers to the Florian family.