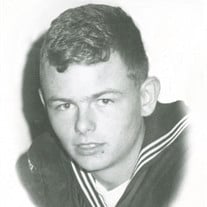 Lifelong Toledo resident, John C. Calgie, 73, gave his final salute, August 16, 2020, in his home surrounded by family. John, fondly known as papa or red eye papa, was born October 23, 1946 to John and Evelyn Calgie. He proudly served in the United States Navy aboard the USS Charles S. Sperry destroyer in the Vietnam War. While in the Navy, he became a skilled and gifted electrician and later started his own company, Calgie Electric. Starting with a single truck and eventually growing into his own shop, John never missed a day of work and bestowed that work ethic upon his children. John was the self-proclaimed and would often answer his phone as “the world’s greatest electrician”! John was a Civil War historian who disliked being called a Civil War buff. At any chance, invited or not, he would bestow his Civil War knowledge on anyone who would bend an ear. He will be remembered as a kind, generous man with a fierce love for his family. He was often referred to as a “character” and wore that badge proudly on his “uniform” consisting of jeans, suspenders, and that beloved hat. John is survived by his beloved wife, Emily “Jo” Calgie. After 49 years of marriage, he still lovingly served her morning coffee. Together they enjoyed taking rides in the car, dining out for lunch, traveling, and spending time with their grandchildren. John is also survived by sons John “JJ” Calgie , and Jude Calgie; daughters Johanna (David) Brancati and Jacqueline (Jim) Chandler; brother Jim (Darlene) Calgie; sister Judy Calgie; and grandchildren Megan, Molly, Makayla, Jack, Cole, Josie and Jase and all family and friends to whom he touched over 73 years. John was preceded in death by his mother, Evelyn Calgie, father, John Calgie and nephew Eric Rasmussen. Family will be receiving guests on Sunday, August 23 from 2-7 p.m. at the Coyle Funeral Home, 1170 S. Reynolds Rd. A private funeral will be held on Monday, August 24. Masks and social distancing are requested. Private interment at a later will be at Resurrection Cemetery, with military honors. In lieu of flowers, family is requesting donations to Saint Jude Hospital or Tunnels2Towers charities, two of his favorites. Please view John’s memorial video tribute and leave a condolence message at CoyleFuneralHome.com. Papa…We salute you…Rest in Peace.

The family of John Charles Calgie created this Life Tributes page to make it easy to share your memories.

Send flowers to the Calgie family.