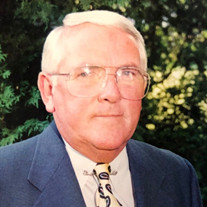 John M. Brennan, well known in Toledo athletic circles both as an entrepreneur and as a high school administrator, passed away peacefully at the Kingston Residence of Perrysburg on March 2, 2022. He was born on January 26, 1933, to Sam and Margaret (Sullivan) Brennan, and they preceded him in death. John married Barbara Grothjan on June 21, 1958, and they were married nearly 64 years. John is survived by Barbara and sons Kevin (Buffy) Brennan, Michael Brennan, John (Laura) Brennan, Tom Brennan; grandchildren Kathleen, Andy, Amy, Liam and Michael; sister Margaret (Richard) Shimman. John grew up in the old South end and attended St. James Catholic School, Central Catholic High School (Class of 1951), Bowling Green State University and the University of Toledo. He proudly served his country in the United States Army (March 1953-March 1955) and was honorably discharged as a Corporal after serving 19 months in France and Germany. John served as a member of the Toledo Fire Department from 1957 until his retirement in 1985. He worked for The Athletic Supply Company from 1959 to 1980 working with area elementary school teams, high school teams, the University of Toledo, and Bowling Green State University teams. In 1980 John co-founded Brennan-Eberly Team Sports, Inc. with Bob Eberly where John served as President. Team Sports grew into the area's premier supplier of athletic equipment and uniforms to teams and schools on all levels. He retired from Team Sports in 1993 to become the assistant athletic director at St. John's Jesuit High School, a position he held until final retirement in 2010. John was inducted into the Toledo City Athletic League Hall of Fame for distinguished service in 1992 and received the 1998 Distinguished Service Award from the Toledo Chapter of the National Football Foundation. In 2018 he was elected to the St. John's Jesuit High School Hall of Fame for which he was most proud of. He and Barb were founding members of St. Patrick of Heatherdowns Catholic Church, a lifetime member of the St. Jude Council of the Knights of Columbus, and a member of the Toledo Retired Firefighters Association. He was a proud first-generation Irish American, had friends from all walks of life, and was a 30-year member of Heatherdowns Country Club. He loved golf and cheering on his Notre Dame Fighting Irish, Green Bay Packers, and Cleveland Indians. We are all grateful for the kind and loving care of the Kingston staff in the memory care living and the Hospice of Northwest Ohio Friends may visit at the Coyle Funeral Home, 1770 S. Reynolds Rd., on Thursday, March 10th from 2:00pm to 8:00pm. Funeral Mass will take place at St. Patrick of Heatherdowns Church on Friday, March 11th at 10:00am. Interment will be at Resurrection Cemetery. Memorial Contributions may be made to International Samaritan, 803 N. Main St., Ann Arbor, MI 48104. Please view and sign the online guest registry at www.coylefuneralhome.com

John M. Brennan, well known in Toledo athletic circles both as an entrepreneur and as a high school administrator, passed away peacefully at the Kingston Residence of Perrysburg on March 2, 2022. He was born on January 26, 1933, to Sam and Margaret... View Obituary & Service Information

The family of John Michael Brennan created this Life Tributes page to make it easy to share your memories.

Send flowers to the Brennan family.