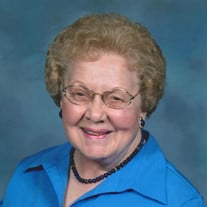 Joanna, a woman of many lives, passed away at the age of 94 on March 25th, born on December 1, 1926, along with her twin brother John B. to her late parents Agnes M. (Spenthoff) and Bernard J. Simon. After graduating from Immaculate Conception School, Toledo, Joanna entered the convent of the Sisters of St. Francis in Sylvania on September 6, 1941. When she took her final vows, she was given the name Sister Mary Clare Agnes in honor of her two sisters and her mother. She remained in the convent until February 3, 1966, but continued her teaching career, which included schools in Michigan, Ohio, Pennsylvania, Minnesota, Illinois and Texas, eventually becoming an education consultant for The Open Court Publishing Co in Illinois. “Jo” had two very happy marriages. Her first, to Leonard B. Shipp in 1969, who passed away November 17, 1979 and to Albert H. Droleskey in 1982, until his passing in September 15, 1992. After retirement Joanna volunteered at St. Joan of Arc in Toledo, reading stories and poems and teaching prayers to the little ones she loved so much. Jo is survived by her sister Clara (Robert) Nowak; step-son Thomas A. (Sharon) Droleskey and step-granddaughter Lucy, step-son Robert (Suzanne) Droleskey, sister-in-law Joyce Simon (the late Bernard Jr.) and many nieces and nephews. Preceding Joanna in death in addition to her husbands, Leonard and Albert, were her parents Agnes and Bernard, and twin brother John and his wife Delores, her sister Agnes Krueger, and brother Bernard Jr. Special notes of gratitude to sister-in-law Joyce Simon, step-daughter-in-law Suzanne Droleskey, niece Jane Simon, faithful friends Gerry and Michael Smith, Lucy Reiter, Sara Gardner, and Esther Lee. Thank you to the staff at Oak Leaf Village Toledo, especially Jaime, Brenda, Kim and Beth and the Ohio Living Hospice care-givers. The family will receive guests on Monday April 5, 2021 starting at 10:00 am at St. Joan of Arc Catholic Church. The Funeral Mass will begin at 11:00 am. Masks and social distancing are required. The Funeral Mass will be live streamed at joanofarc.org Interment will take place in Mont Meta Memorial Park Cemetery, San Benito, TX, next to her first husband Leonard E. Shipp. In lieu of flowers, Joanna has requested donating to the Victory Center, Heartbeat of Toledo, St Jude Children’s Hospital or charity of donor’s choice.

Joanna, a woman of many lives, passed away at the age of 94 on March 25th, born on December 1, 1926, along with her twin brother John B. to her late parents Agnes M. (Spenthoff) and Bernard J. Simon. After graduating from Immaculate Conception... View Obituary & Service Information

The family of Joanna Marie Droleskey created this Life Tributes page to make it easy to share your memories.

Send flowers to the Droleskey family.