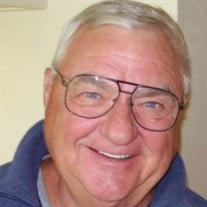 James (Jim) Edward Coyle passed away September 25th, 2021, suddenly and peacefully at home in Sun Valley with his wife, Maureen, by his side. Jim was born to William C. and Lillian (Held) Coyle in Toledo, Ohio on July 28th, 1936. Jim was the middle brother of eight brothers and sisters, in a family with a built-in musical band, where he became the designated flute player. He attended Toledo Catholic High School and later graduated with a B.S. in Business Administration from the University of Dayton in 1958. While getting his degree, he worked at the University Bookstore, sparking a love for reading history and gaining a keen ability for “sales”. Following graduation, he served a short stint in the Army. He had a passion for basketball and played throughout his childhood and college and continued his love for the sport by coaching middle school in Toledo. His claim to fame was in a pick-up game where he was fouled by Bill Walton. In 1961 he decided to “move west” and loaded up his tiny MGA. He landed in the San Francisco Bay area where he worked several years as a stockbrocker. One afternoon, during a Saturday beer party, he met the love of his life Maureen Rossiter, and the rest was history. This past August, they celebrated their 58th wedding anniversary. By chance in 1973 Maureen showed him an ad in the San Francisco Chronical classifieds titled ‘Business for Sale in Fishing Country’. That was all it took, they moved the family to the Wood River Valley, where they have lived and raised the family ever since. The so-called business, ‘Speedy B Property Management’ held Jim over until he transitioned into the real estate business, becoming the owner-broker of Elkhorn Realty until his retirement in 1999. He was president of the local Rotary chapter where at one time he held the presidency and was also a member of the Sun Valley Water and Sewer Board, and the Blaine County and Idaho Real Estate Boards. Music - Jazz and Swing in particular - was integral to Jim’s soul. He was an active member of the Lady of our Snows Catholic Church where he sang with the choir and played the flute. He also loved being a member of the Caritas Chorale and singing in their performances. His living room stereo was usually blaring with Count Basie or Frank Sinatra, where he would get lost improvising on his flute. Jim loved to fly fish, especially for trout in Alaska and Idaho, or any of the western states for that matter, but Silver Creek will never be replaced in his heart. He was a man of ‘routine’, and could be found in his float tube every chance he could get - after coffee with the gang and a few laps in the pool at the local athletic club of course. More than anything, Jim loved to say hello, and make people laugh. Perhaps one of the early inventors of the dad joke, he never passed up the chance to make someone’s day with his silly sense of humor. He considered everyone his friend and had a true love of all people. He was perhaps most proud of his children, and while he never missed the opportunity to playfully embarrass them, he was also the biggest fan and supporter to both his son, James (J.P.) and his daughter, Anne. He was preceded in death by his parents, his brothers William and Michael, and his sister Mary Anne. He is survived by his wife Maureen, his son James Coyle and daughter-in-law Jo- Anne Dixon, his daughter Anne and son-in-law, Michael Brunelle, and his four grandchildren, Ben and Lily Brunelle, and Per and Signe Dixon. The four grandkids gave him great pride. Also surviving are his sister, Kitty Doherty, Ned Coyle, and Joe Coyle, all of Toledo, OH and John B. Coyle of Leland, No. Carolina If you care to make a donation in his name please send it to Camp Rainbow Gold, Caritas Chorale, or the charity of your passion. A service will be held at Our Lady of the Snows in Sun Valley on October 9th at 11:00 AM with a reception to follow at the church. The family and church kindly asks that you wear a mask and be cognizant of Covid 19 protocols. He will be missed by all.

James (Jim) Edward Coyle passed away September 25th, 2021, suddenly and peacefully at home in Sun Valley with his wife, Maureen, by his side. Jim was born to William C. and Lillian (Held) Coyle in Toledo, Ohio on July 28th, 1936. Jim was the... View Obituary & Service Information

The family of Jim E. Coyle created this Life Tributes page to make it easy to share your memories.

Send flowers to the Coyle family.