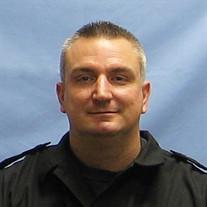 Jeffrey L. Hood, 48, passed away on July 7, 2017 after a valiant battle with cancer. Jeff was born in Toledo, Ohio on February 16, 1969. Jeff graduated from Bowsher High School in 1987. He earned his Bachelors Degree in Criminal Justice from University of Toledo, his Masters of Criminal Justice from Tiffin University, and received his Doctorate in Business Administration, with a specialization in Homeland Security from North Central University, Arizona. Jeff served in the Ohio Army National Guard 323rd Military Police Company from July 31, 1991, retiring on July 30, 2012. He was appointed to the Toledo Police Department in November of 1995. He served in Field Operations, SWAT, and Criminal Intelligence. Jeff enjoyed riding his motorcycle, reading, and hosting parties for all his family and friends. His most cherished moments were spending times with his boys. He enjoyed their summer trips camping with family and the yearly trip to Cancun. Jeff was loved by all because of his humbleness, his infectious smile and kind heart. He will be missed dearly. Jeff is survived by his loving wife Melinda, children Rene (Ellyse) Losoya III, Monique Losoya, Brody Hood, Gabriel Losoya, and grandson Jackson Losoya; his mother Barbara Kravetsky; brothers, Timothy A. Hood, and James E. (Lorie) Kravetsky, sisters, Kelly (Michael) King and Diane (Bob) Aikman. He was preceded in death by his father James E. Kravetsy, Sr., infant brother Scott, and his grandparents. Friends may visit at the Coyle Funeral Home, 1770 S. Reynolds Rd. on Wednesday, July 12, from 2-8 p.m., with a scripture service at 7:00. The funeral will begin at 9:30 a.m. in the funeral home on Thursday, July 13 with the funeral mass held at 10:00 at Our Lady of Perpetual Help Church. Interment will be private. Memorial donations may be given to the American Cancer Society. Please view Jeff’s Memorial Video Tribute and leave a condolence message for the family at CoyleFuneralHome.com. Every super hero doesn’t wear a costume!

Jeffrey L. Hood, 48, passed away on July 7, 2017 after a valiant battle with cancer. Jeff was born in Toledo, Ohio on February 16, 1969. Jeff graduated from Bowsher High School in 1987. He earned his Bachelors Degree in Criminal Justice from... View Obituary & Service Information

The family of Jeffrey Lynn Hood created this Life Tributes page to make it easy to share your memories.

Send flowers to the Hood family.