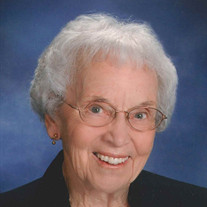 Jean L. Bigler, 94, passed away on December 9, 2017. She was born on April 23, 1923 to John J. Ritz and Jean C. Ritz (Grieve) in Columbus, Ohio. Jean married Raymond Gregory Bigler on December 31, 1945 at Corpus Christi Church in Columbus. She worked at Lennox Furnace, and during World War II helped building airplanes for the war effort. Together, they moved to Toledo in 1948 and in 1952 built their house that Jean lived in the rest of her life. She worked at OLPH as a school bus driver, and later as school secretary. Jean and Ray raised eight children; Priscilla Jean (Debien), Raymond Gregory, Thomas Patrick (Suzanne), Robert Eugene, Therese Ann (Dennis Addis), Delbert Michael (Teresa), Edward Joseph, and John Francis. Jean and Ray had 16 grandchildren; Jim, Canute, Amanda (Peaches), Amanda, Julie, Michael, Meghan, Jeremy, Jennifer, Jonathan, Corey, Jason, Jarod, Courtney, Jack, Harry. They also had ten great-grandchildren and four more on the way. Jean enjoyed always being around the water. She loved boating, vacationing on lakes and anything outdoors - she even rode a jet ski at the age of 88. Jean loved to tell the story of taking her kids out on the boat one time by herself, running out of gas, and needing to be towed back in by a nice stranger. Her life revolved around her family, and with eight kids that was a lot of revolving! She truly loved being involved in their activities and with that came numerous stories of who got left behind at what ballgame or in the sandbox. She was devoted to her Catholic faith and a dedicated parishioner at OLPH. Anyone there would tell you that if they needed something she was the one to see. In her 25 years as school secretary, she was happiest when she could help the students, and to this day is fondly remembered by many of them. The priests at OLPH were some of her best friends - Jean and Ray even co-owned a boat on a Lake Erie with Father Reichart and Father Shepherd. Her favorite leisure time activity was playing euchre and pinochle with friends and family, especially her good friend and next door neighbor Jackie Sutter (who also had 8 children!). Her very close niece Carol Williams was a wonderful comfort, and also a euchre partner. She is survived by her children, her grandchildren, her great-grandchildren, her sister Marjorie Ewing, who has been her best friend her entire life, her brother John Ritz, her sister-in-law Martha Ritz, and many nieces and nephews. She was preceded in death by her husband Ray of 58 years, her daughter Priscilla, her grandson Jack Bigler, her brother Tom Ritz, and her 2 cocker spaniels Tuffy and Brandy. Friends may visit at the Coyle Funeral Home, 1770 S. Reynolds Rd. on Wednesday, December 13 from 4-8 p.m. with a Rosary Service at 7:30. The funeral Mass will be celebrated at OLPH Church on Thursday, December 14 at 10:30 a.m. Burial will be at St. Joseph Cemetery, Maumee, Ohio. In lieu of flowers, memorial contributions may be given to the Ursuline Sisters or OLPH Church. Please leave a condolence message for the family at CoyleFuneralHome.com.

The family of Jean Louise Bigler created this Life Tributes page to make it easy to share your memories.

Send flowers to the Bigler family.