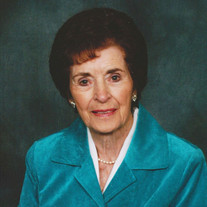 Jane Elizabeth (Anistik) Restivo passed peacefully in her sleep on November 11, 2018 at the age of 94. She was born July 31, 1924 to Lawrence and Mary Anistik. She was number 12 of 13 and attended Central Catholic High School. She soon met Francis “Judge Bud” Restivo and married in 1942. The marriage lasted 70 years. Their marriage was a true love story that survived a war that kept them apart for three years. They were rewarded with seventy years of marriage and a large Italian family. She was a devoted wife, mother to four, grandmother to thirteen and great-grandmother to twenty. In her lifetime Jane worked as a secretary for the Latrobe Steel Company, became a member of the Toledo Bar Auxiliary and volunteered at the Sunset House, pouring coffee for the residents and engaging them in lively conversation. She also shared many good times with her supper club and card club friends. While Jane spent her time raising her family and helping with her grandchildren, she still found time to join a bowling league, something she thoroughly enjoyed. Traveling with her husband also took her to many fascinating places. She also felt it was her duty to work in the voting booth during every election. That was a time when she would sit in those tiny portable wooden booths and then count, by hand, all the votes. After moving to Maumee, Jane became a member of St. Joan of Arc where she faithfully attended Mass with her husband Bud. They sat in the same pew every Sunday and struck up a friendship with whoever sat around them. Jane loved people and shared news of her family whenever she had the chance. Also surviving Jane are daughters Janet (Dave) Krzyminski, Debbie (Tom) Bennett, Bernadette Restivo and son Joseph (Beth) Restivo. Jane also is survived by her only living sibling Irene Coates in California and numerous nieces and nephews. We, as a family, are eternally grateful to the nurses, aides and kitchen help who all worked to make Mom feel loved during the six plus years she lived at the Lakes of Monclova. They became her second family, especially Dorothy, Mona and Sharon who shared a dining table with mom for six years. A special thanks to Allison and Theresa who cared for one as part of their family. Our gratitude also extends to Hospice of NW Ohio for being Mom’s support and caregivers during her last week. Their kind attention gave Mom and our family comfort while going through a trying time. Mom had a love for Lial School in Whitehouse Ohio. She admired the dedication that the Sisters of Notre Dame gave to their schools. In lieu of flowers, donations may be made to Lial School in Whitehouse Ohio in Jane Restivo’s name, or the Francis and Jane scholarship Fund at the University of Toledo College of Law. Visitation will be held at the Coyle Funeral Home, 1770 S. Reynolds Rd. on Wednesday November 14 from 3:00 to 7:00 pm, with a scripture service taking place at 7:00 pm. Funeral services will be held on Thursday November 15 beginning at 10:00 am at the funeral home, followed by the funeral mass at St. Joan of Arc Church at 10:30 am. Entombment will be in Toledo Memorial Park. Please view and sign the guest registry at coylefuneralhome.com.

Jane Elizabeth (Anistik) Restivo passed peacefully in her sleep on November 11, 2018 at the age of 94. She was born July 31, 1924 to Lawrence and Mary Anistik. She was number 12 of 13 and attended Central Catholic High School. She soon met... View Obituary & Service Information

The family of Jane Elizabeth Restivo created this Life Tributes page to make it easy to share your memories.

Send flowers to the Restivo family.