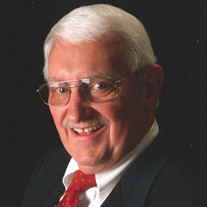 It is with great sadness the Stegeman family shares that James Lorain Stegeman, 83, a lifelong Toledo resident, passed away of Covid complications on December 20, 2020. He was surrounded by his loving children, Julie, James and Dawn. A 1955 DeVilbiss High School graduate, he was the proud manager of the DeVilbiss Championship Football teams. James married Barbara Jean (Wilcox) Stegeman in 1958, sharing 61 years of marriage together. She preceded him in death on March 3, 2020. He was born July 10, 1937 to John George Stegeman III and Helen Margaret (Sauer) Stegeman. During high school, he worked for his uncle Louis in the family bakery. He was a member of the Ohio National Guard for over 10 years. James worked for Toledo Trust bank and attended the University of Toledo. He later joined the family house painting business with his father. James was a self-employed painting contractor for 55 years. He employed many unique personalities who became lifelong friends. The "paint crew" adventures will live on in infamy. He sponsored the Goodley JO's softball teams and numerous golf outings leading to many lifetime memories. Additionally, James and Barbara enjoyed many activities together especially traveling to Las Vegas, Florida, California, Arizona and Michigan with family and friends. They also loved going to Cedar Point, Disney World, out to dinner, watching old movies, cooking and travel shows. James was a lifelong fan of the Cleveland Browns, Ohio State Buckeyes and the New York Yankees. He would often be outside raking the leaves and listening to the games then hurry into the house for the replay. Everyone would agree that Jim never missed an opportunity to make a friend or strike up a conversation whenever possible. He loved keeping up on everyone's activities and would frequently call them for updates. He was preceded in death by his parents John and Helen, brothers John George, Richard John, sister Mary Ann (Stegeman) Mollenkamp. James is survived by his three children Julie (Douglas) Pavelko, James Stegeman, Dawn (Scott) Zura; grandchildren Jacqueline (Donald) Newell, Stephen (Katherine) Pavelko, Christine Pavelko and Michael Pavelko, Katherine Zura, Elizabeth Zura; great grandchildren Mackenzie Newell, Leighton Pavelko and another expected in March; his sister Elizabeth (Raymond) Goodman, in-laws William (Judy) Wilcox and Mary Catherine Whiting as well as numerous nieces and nephews, cousins and extended family and friends. The family would like to thank the staff at UTMC for their kindness and care during this difficult time. There will be a funeral Mass celebrated at St. Patrick of Heatherdowns Church on December 30, 2020 at 11:00 a.m. with an hour of visitation beginning at 10:00 a.m. Burial will be at Toledo Memorial Park Cemetery. Masks and social distancing are required. The funeral Mass will be livestreamed at . Coyle Funeral Home is assisting the family with arrangements. Please leave a condolence message at CoyleFuneralHome.com. Donations in James' memory may be given to Eleanor N. Dana Cancer Center, on The University of Toledo Health Science Campus, 1325 Conference Drive Toledo, OH 43614.

It is with great sadness the Stegeman family shares that James Lorain Stegeman, 83, a lifelong Toledo resident, passed away of Covid complications on December 20, 2020. He was surrounded by his loving children, Julie, James and Dawn. A 1955... View Obituary & Service Information

The family of James Lorain Stegeman created this Life Tributes page to make it easy to share your memories.

It is with great sadness the Stegeman family shares that James...

Send flowers to the Stegeman family.