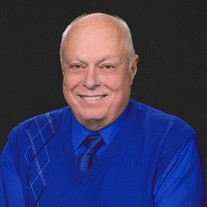 James Edward Smith (Jim) of Toledo, Ohio passed away peacefully surrounded by family on Saturday April 9th at the age of 76. Born September 30, 1945, he grew up on the west end of Toledo. His parents were Edward H. and Dorthy W. Smith. Jim had an older sister, Betty Jean, and grew up playing the drums and performing on stage with his sister. Jim graduated from Devilbiss High School in 1963. From there, he attended college at both The Ohio State University and the University of Toledo. In 1966, he met and courted the love of his life, Teresa (Terri) A. Myers Smith. They married in 1968 and lived a storybook life together. Jim and Terri traveled frequently to destinations near and far. He joined the 555th Ohio Air National Guard's band in 1967 and was very proud of his service. A man of integrity and honor, Jim worked diligently in his professional and personal life to provide for his immediate and extended family. He was faithfully a man of service and was significantly involved in community matters in Toledo and then later, Maumee. A few of his contributions, among many, were: Maumee Rotary member, president of the Maumee Chamber of Commerce, president of the Maumee Little League, and silent donor for many of the local projects around the city and his home church, St. Joseph's Catholic Church. He enjoyed family, friends, and gatherings of any kind. Any friend Jim made, was life-long. He played golf and for several years was an active member of the Toledo Country Club and Brandywine Country Club. Of the accomplishments he was most proud, supporting his kid's pursuit of higher education was the greatest. Although he never finished college, he was adamant that his kids had the opportunity to pursue their higher education goals. Jim was preceded in death by Edward H. Smith (father), Dorthy W. Smith (mother), Betty Jean Smith (sister), Bradley J. Smith (son), and Katherine E. Myers (sister in-law). He will be greatly missed by his wife Terri, and surviving children Todd G. Smith, James M. Smith, Meghan E. Smith; grandchildren Bradley M. Smith, Jaden R. Longfellow, Brenton S. Smith, Truitt J. Smith; brother in-law Joseph A. Myers; niece Rebecca Koike (Michael); nephews William K. Newcomb, III, Matthew Myers (Wendy), and Thomas Myers (Tamara). Family will receive friends on Monday April 18th from 4-8pm with a Scripture Service at 7pm at Coyle Funeral Home, 1770 S. Reynolds Rd, Toledo OH 43614. Funeral Mass of the Resurrection will take place at St. Joan of Arc Catholic Church on Tuesday April 19th at 11am with burial to follow at St. Joseph's Cemetery in Maumee. Finally, should you hit a hole-in-one on any golf adventure in 2022, credit him with the success and toast him with a scotch. Memorials may take the form of contributions to the Cherry Street Mission, Wounded Warriors (Northwest Ohio Chapter) or to First Tee (Northwest Ohio Chapter). Please view and sign our online "guest registry" at www.coylefuneralhome.com

James Edward Smith (Jim) of Toledo, Ohio passed away peacefully surrounded by family on Saturday April 9th at the age of 76. Born September 30, 1945, he grew up on the west end of Toledo. His parents were Edward H. and Dorthy W. Smith.... View Obituary & Service Information

The family of James E Smith created this Life Tributes page to make it easy to share your memories.