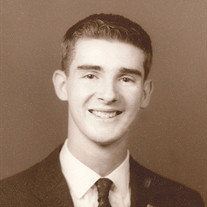 James R. Quigg, 77 years of Toledo, Ohio, passed away on Tuesday August 24, 2021 in the Sunset House where he had been living for the past four years. Jim was born in Toledo, on February 23, 1944 to LeRoy and Helen Quigg; he was a graduate of DeVilbiss High School Class of 1963. Jim worked for the Doehler Jarvis Company as an inspector for 25 years retiring in 1997; he worked for Sun Oil Refinery (Oregon) in security for many years; from 2007 to 2012 he worked for the Toledo Museum of Art monitoring the various galleries and answering visitor's questions. He had a great love of animals. For a few years Jim had his own pet care service where he cared for dogs, cats, and birds. His passion for restoration of historic homes in the Old West End and Westmoreland were meticulous and detailed. His love of old homes extended to helping others with their projects stripping wallpaper or woodwork, rewiring old light fixtures or having the right old house part they needed. He also enjoyed traveling. Jim contributed to his neighborhoods by opening his homes for neighborhood tours. He was previously active in the Old West Association and Old West End Security, Collingwood Task Force and the Westmoreland Association. Jim was preceded in death by his parents. Jim's beloved cat, Kiki, and beloved dog, Sam, had crossed over years ago. He is survived by his brothers LeRoy and Teryl (Barbara) Quigg; cousin, Gretchen Quigg (Portland, Oregon); special friends Lansing Stoll, Judy Stone and Shawn. There will be no visitation. Private graveside services will be held in the Swan Lake Chapel in Toledo Memorial Park Cemetery. The Coyle Funeral Home is assisting with arrangements. A special thank you for the excellent care from the staff members of Sunset House and Ashanti Hospice and Palliative Care. Memorial contributions may be made in his memory to the Toledo Humane Society, 827 Illinois Ave, Maumee, Ohio 43537. Please view the guest registry at CoyleFuneralHome.com.

James R. Quigg, 77 years of Toledo, Ohio, passed away on Tuesday August 24, 2021 in the Sunset House where he had been living for the past four years. Jim was born in Toledo, on February 23, 1944 to LeRoy and Helen Quigg; he was a graduate of... View Obituary & Service Information

The family of James Quigg created this Life Tributes page to make it easy to share your memories.

Send flowers to the Quigg family.