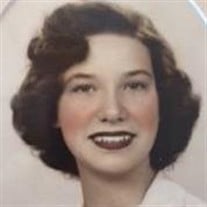 Jacqulyn Ann (Jackie) Chambers Craft, age 92, passed away on February 10, 2017 at Kingston Residence of Perrysburg. She was born on November 9, 1924 to Thomas and Miretta (Walsh) Chambers. She attended St. Charles Catholic School and the former... View Obituary & Service Information

The family of Jacqulyn Ann Craft created this Life Tributes page to make it easy to share your memories.

Send flowers to the Craft family.