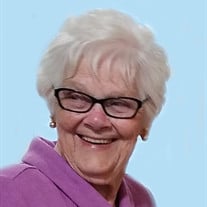 Jacqueline (Myers) Lee Kettman, age 86, died peacefully on the afternoon of May 4, 2021. Jacque was born in Cornell, Illinois on April 25, 1935. She grew up a small-town girl and she never really lost that innocence. Her world changed when she married Fred Henry Kettman of Streator, Illinois at the age of eighteen. They immediately moved to Reno, Nevada where Fred was stationed with the Air Force. After their time in Reno, they moved back to Streator and then on to Toledo, Ohio in 1957. There, Jacque would settle and grow her family with Fred. As a dedicated mother, she and Fred successfully raised six children, three boys and three girls. Jacque began pursuing her lifelong passion for sewing by creating outfits for herself, her three little girls and clothes for the girls' Barbie dolls. As the family matured, she took several interesting jobs including cooking for the nuns at St. Patrick of Heatherdowns, managing the family's ice cream store and stocking greeting cards. Also during this time, Jacque became famous for her two ever growing collections, decorative pitchers and cardinals. It became a family event to see who could find the most unique cardinal-themed gift for her birthday or Christmas. Later in life, Jacque and Fred found their dream house in Perrysburg, Ohio. Many a celebration was held in this house that accommodated their growing family of grandchildren and great-grandchildren. Now empty-nesters, Jacque and Fred took several cruises from Alaska to Europe. For someone who would not get near a pool, her children were always amazed that Fred got Jacque to take these trips. During this time, her sewing hobby had grown from Barbie doll clothes to American Girl doll clothes. Trips to the fabric store to get the right fabrics and trims were some of her favorite activities. She participated in many craft shows, selling her growing inventory of doll clothes. After fifty-three years together Fred passed away in 2006 and Jacque began life on her own. She kept busy playing bridge with her various bridge groups. She became a regular volunteer at Hospice of Northwest Ohio in Perrysburg as one of the "flower ladies" who ensured there were flowers in every patient's room. Hospice also made use of Jacque's sewing skills. She made pillows and activity blankets for the patients as well as participating in their quilting group. Jacque quickly became known as the "pillow lady". Her work at Hospice was never a job but always a pleasure for Jacque and she continued sewing those pillows as long as she could. She was preceded in death by her loving husband, Fred; parents, James and Aldene (Patterson) Myers; sister, Rose (Gunder) Mitchell and Dean (Boyd) Rock and brothers, James (Phyllis) and Bill (Skeet) Myers. Jacque is survived by her children: son, Michael (Kathleen) Kettman; daughter, Pamela Kettman, daughter, Paula Hills, daughter, Theresa (Bernard) Brassil; son, James (Kimberly) Kettman; son Christopher (Tammi) Kettman; eight grandchildren and their spouses; nine great-grandchildren; and one great-great-grandchild. She is also a beloved aunt to several nieces and nephews. Jacque will be missed by her family and all those who knew her; she never met a stranger. Jacque's family would like to thank the staff at Hospice of Northwest Ohio for their care in Jacque's final days and Waterford at Levis Commons for their kindness and compassion while she lived there. Friends may visit at the Coyle Funeral Home, 1770 S. Reynolds Rd., Toledo, Ohio on Monday, May 10, 2021, from 2:00-7:00 p.m. where a Scripture Service will be recited at 6:30 p.m. A private service and burial will be held Tuesday, May 11, 2021. In an attempt to include friends and family from far and wide to celebrate the life of Jacqueline Kettman we are pleased to offer a Live Stream of the Funeral Service for Jacqueline beginning at 10:45, Tuesday, May 11, 2021 for those who wish to attend the Service virtually. To participate in the service via Live Stream please CLICK HERE anytime after 10:45, Tuesday, May 11, 2021 and you will be directly connected to the Live Stream of Jacqueline’s Service. To register for the Live Stream and receive a reminder email, text and calendar invite CLICK HERE Registering for the service will both help the family know who attended as well as providing the opportunity for technical support, if you should need any, before and during the service. Memorial donations may be made to Hospice of Northwest Ohio, 30000 East River Rd., Perrysburg, OH 43551. Please view and sign our online "guest registry" at CoyleFuneralHome.com

Jacqueline (Myers) Lee Kettman, age 86, died peacefully on the afternoon of May 4, 2021. Jacque was born in Cornell, Illinois on April 25, 1935. She grew up a small-town girl and she never really lost that innocence. Her world changed when... View Obituary & Service Information

The family of Jacqueline (Myers) Lee Kettman created this Life Tributes page to make it easy to share your memories.