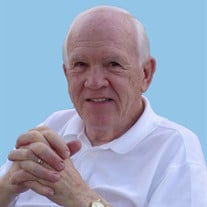 Jack Herbert Ruth Born June 26, 1927 and went to be with The Lord on October 10, 2018 Jack was born to Stanley “Doc” and Ella Ruth in Youngstown, OH, growing up in Cleveland and Detroit. He proudly became a United States Marine, serving with an honorable discharge as a Sargent in 1949. Jack attended Wayne State University and then married Lois Holstein. Together they had four boys, Jack (Carrie), David (Sue), Gari (Darlene) and Mark (Barb). In 1957 Jack started and ran The Ruth Corporation, a steel tube and machinery business. Years later he met his best friend and the love of his life, his bride Connie Floyd Girkins. They married in June of 1967 Connie had seven kids at the time Ralph (Joyce), Chipper (Pam), Johnny, Joe (Tammy), Julie (Yavuz), Gregory and Jennifer (Dennis). Together they decided to have two more children, Tony (Monica) and Sarah (Travis). That’s a lot of kids, each bringing more love and joy to this big crazy family! They absolutely loved raising their children in Sylvania and cherished all the friends and memories they made. Jack was a founding member on the board of directors for Sylvania Tam-O-Shanter. He was an absolutely an instrumental lead in the development of youth hockey in Sylvania. In 1995, Together with his best buddy and Navigator, Doc Tom Young, they ventured out on “The Great American Race” in what Jack named “Ol’ Darlin” that was a 1924 Buick Master 6 with 5” wide wheels traveling 4,500 miles across Canada, United States and Mexico. Our Dad continued his passion and started “The Old Car Barn” which he owned to spend more time with his pals and other old car enthusiasts. Jack and Connie shared a strong love for the Lake Erie Islands, spending many years on the water at Catawba Island Club. They spent some of their greatest years in Sarasota, FL entertaining and enjoying the very best of everything. They made the memories of a lifetime and the most cherished of friends. Jack is preceded in death by his parents, his brother Bud and 3 of the children, Julie, Johnny and Gregory. He is survived by all that have loved him, his brother Tim and the rest of our family…including over 24 grandchildren and 18 great grandchildren. We will celebrate Jack’s life in full Marine honor Saturday October 20, 2018 from 12:00 to 4:00 PM on the grounds of Swan Creek Retirement Village in the Reed Chapel 5916 Cresthaven Lane Toledo, OH 43614. Special love and support to our sister Jennifer, you have been THE ROCK. Semper Fi Dad, Semper Fi!

Jack Herbert Ruth Born June 26, 1927 and went to be with The Lord on October 10, 2018 Jack was born to Stanley &#8220;Doc&#8221; and Ella Ruth in Youngstown, OH, growing up in Cleveland and Detroit. He proudly became a United States Marine,... View Obituary & Service Information

The family of Jack Herbert Ruth created this Life Tributes page to make it easy to share your memories.

Send flowers to the Ruth family.