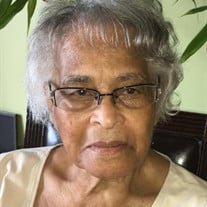 Inez P. Hunt May 3,1928 - Dec. 10, 2019 Inez P. Hunt 91, of Toledo, Ohio, passed away peacefully on Tuesday, December 10, 2019, at the University of Toledo Medical Center surrounded by her loving family. She was born May 3, 1928, in Pear Tree Grove, St. Catherine, Jamaica, to Charles and Susan Gibson. Before migrating to the United States of America she taught in Jamaica where she met the love of her life Osbourne. On the 3rd of October 1953, they exchanged marital vows in New York and later relocated to Toledo, Ohio where she worked as a Nurse’s Assistant at the State Psychiatric Hospital here in Toledo, until leaving to take care of her family. Inez was the loving caring mother of four children, two biological daughters, Angela and Patricia and two by marriage, Gloria and Silbert. Inez always put her family first and enjoyed treating them wherever they were located, especially at Christmas time with her Jamaican fruit cake that everyone looked forward to receiving in the mail every year. Inez also enjoyed crocheting and cooking and was always in the kitchen preparing her scrumptious Jamaican meals and experimenting with exotic recipes up to the time she was hospitalized. She was preceded in death by her parents, husband, seven siblings and a great-great granddaughter. She is survived by her daughters Gloria Francis, Angela Hunt and Patricia Newman; son Silbert Hunt (Jean) of Jamaica; 12 grandchildren, 12 great- grandchildren and 8 great-great grandchildren; brother H. Calvin Gibson and numerous nieces and nephews. Her memory will remain in our hearts forever. Visitation will be held at the Coyle Funeral Home, 1770 S. Reynolds Rd., on Friday, December 20, 2019, from 2:00 - 8:00 pm. A Memorial Service will be held at Unity of Toledo, 3535 Executive Parkway, Toledo, OH 43606, on Saturday, December 21st, at 11:00 am. Memorials may take the form of contributions to the Autism Society of Northwest Ohio or to a charity of the donor’s choice. There will be a luncheon immediately following the service in the church hall.

The family of Inez P Hunt created this Life Tributes page to make it easy to share your memories.

Send flowers to the Hunt family.