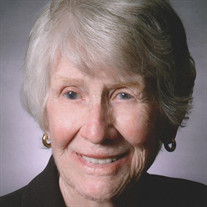 Helen Morgan Williamson of Toledo, Ohio, departed this life on August 5, 2019 at St. Luke’s Hospital after a short illness. She was 95. Helen was born on January 2, 1924 to Bess (Hutchinson) and John Morgan in Bridgeport, Ohio. She graduated from Kent State University in 1945 with a BS Degree from the College of Education. Helen was president of Tri Sigma Educational Sorority which later became affiliated with Delta Gamma Social Sorority. Helen married her fellow college student and sweet-heart John P. Williamson. Together they raised three sons. They spent their first six years in Cleveland and then moved to Toledo in 1951 for John’s longtime career with Toledo Edison. She described herself as a full-time mother, wife and volunteer. Helen was very devoted to family, church and service to others. A life-long athlete, she took particular pride in winning many golf tournaments at Inverness Club. Helen was an avid bridge player and belonged to numerous bridge groups over the years. John and Helen thoroughly enjoyed traveling throughout the United States and worldwide. Perhaps her fondest and most enjoyed activity was playing tennis until the age of 80. She enthusiastically applied her considerable skills and optimism to volunteer activities. These included: Organizing a private kindergarten before it was offered in a public school system; Officer and President of a local PTA; President of Epworth United Methodist Church Women’s Guild in Ottawa Hills; President of the Corey Woods Garden Club; and volunteer for the Toledo Meals on Wheels program. Among her many honors she was a recipient of the Gold Medallion Award for service to Kent State University. Her continual roles with the university over many years resulted in the honorary dedication of the Williamson Alumni Center building. Helen and John moved to Swan Creek Retirement Village in 2010. She made many new friends with the residents and staff that enriched her final years. Helen's philosophy was “Life is made up of many stages. When leaving a stage, look forward to new challenges and opportunities. Don't live in the past.” She was predeceased in death by her husband of 70 years, John P. Williamson, parents John and Bess Morgan, brother Orris W. Morgan, sister Jeanette Wands, and grandson Danny L. Adams. She is survived by sons John M. Williamson (Karol), James R. Williamson, and Wayne A. Williamson (Kathy); grandchildren John R. Williamson, Jamison A. Adams (Amanda), Christopher Seitz (Kim), Lisa Bowling (Greg), Laura Baird (Tom), and great-grandson John D. Williamson. The family of Helen Williamson would like to thank the professional staff of Ohio Living Swan Creek. Per Helen’s wishes, in lieu of flowers, please consider donations to the Life Care Commitment at Ohio Living Swan Creek Retirement Village, 5916 Cresthaven Ln, Toledo, OH, 43614 or The Sight Center of Northwest Ohio, 1002 Garden Lake Parkway, Toledo, Ohio 43614. Interment at historic Joy Cemetery in Ottawa Hills will be private. Memorial service and Celebration of Life will be held in Reed Chapel at Ohio Living Swan Creek, 5916 Cresthaven Lane on Monday, August 12, 2019 at 10:00 a.m. Please view and sign the guest registry at coylefuneralhome.com.

Helen Morgan Williamson of Toledo, Ohio, departed this life on August 5, 2019 at St. Luke&#8217;s Hospital after a short illness. She was 95. Helen was born on January 2, 1924 to Bess (Hutchinson) and John Morgan in Bridgeport, Ohio. She graduated... View Obituary & Service Information

The family of Helen Williamson created this Life Tributes page to make it easy to share your memories.

Helen Morgan Williamson of Toledo, Ohio, departed this life on...

Send flowers to the Williamson family.