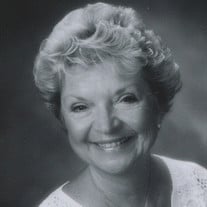 Gloria Sue (Gilbert) Moorehead changed form and peacefully returned home on December 11, 2019. Born in 1934, Gloria lived in Walbridge, OH the first 15 years of her life. After relocating to Toledo, she then completed her sophomore, junior and senior years as a very active and popular student at Scott High School. Two life changing events occurred when Gloria was just 15 years old; the Reverend Donald Duncan said, “Do you know you are special? I believe in you!” That simple statement made a huge impact on Gloria who then became determined to spend her life giving that same precious gift to everyone she met. Also, that same year, Gloria met and at age 18 married the “love of her life”, Lawrence Moorehead. After 40 years they divorced and it was then that Gloria felt guided to seriously dedicate the remainder of her life to the study and teaching of metaphysics and spirituality. She continued to pursue her destiny and mission in this human existence by her persistence in seeking the “truth.” She graduated as a teacher from Unity School, Coptic Fellowship and as a Minister in Divine Science. She played various roles for many years at the Unity of Toledo. Finally, Gloria became their certified Minister for five years. She then founded “Angel’s Landing Spiritual Center” where she continued to search, learn, teach and council until her health declined. Gloria’s dream was to remain a wonderful memory in the hearts and minds of those she loved. She hoped to leave and imprint (memory) in the hearts of those with whom she had taught, lived and loved for so many years. Gloria always credited her only living son, Parry, with being a true “messenger” as he taught her about God in a new way. Their loving and spiritual relationship exceeded the usual Mother/Son roles as they continued to mature and grow together until Parry finally passed away at the age of 46. Gloria wanted to remember her “dear and special friends” and each of you know who you are and how much you meant to her. She was preceded in death by her parents, Leah and Fenton Gilbert and son, Parry Scott. There will be a Memorial of “Friends and Followers” to be held at the Coyle Funeral Home, 1770 S. Reynolds Rd., Toledo, OH 43614 on Sunday, January 26 at 1:00, with visitation beginning at 11:00 a.m. In lieu of flowers, it was Gloria’s wish that any tributes in her memory consist of contributions to Angel’s Landing Spiritual Center,2400 N. Reynolds Rd. #A, Toledo, Ohio 43615.

Gloria Sue (Gilbert) Moorehead changed form and peacefully returned home on December 11, 2019. Born in 1934, Gloria lived in Walbridge, OH the first 15 years of her life. After relocating to Toledo, she then completed her sophomore, junior... View Obituary & Service Information

The family of Gloria Sue Moorehead created this Life Tributes page to make it easy to share your memories.

Send flowers to the Moorehead family.