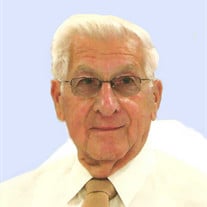 Gerald "Jerry" R. Rossman, 93, of Toledo passed away Monday, December 7, 2020, at Hospice of NW Ohio in Toledo, Ohio. Jerry was born on September 18, 1927 to Alma and Arthur Rossman in their home located in Toledo, Ohio. A 1946 graduate of Genoa High School, Jerry's first job after high school was with the Electric Auto-Lite Company (1946-1953) performing general factory work, inspection, and tool design. Included in two of those six years of employment (1951-1952), Jerry served his country in the United States Army during the Korean War. The following three- and one-half years were spent at Tillotson Carburetors as a Tool Designer. Jerry then worked at the Devilbiss Company in Toledo, Ohio (1957 - 1989), retiring after 32 years as a Manufacturing Engineer. In 1949, Jerry was introduced to Phyllis Jean Burkett while roller-skating at the Coliseum on Summit Street in Toledo. They began to meet there two to three times a week. They were married on July 12, 1952 at St. Mary's Catholic Church in Monroe, Michigan. Their honeymoon took them to Washington, D.C., Niagara Falls, the Skyline Drive in the Blue Ridge Mountains of Virginia, and to the Smokey Mountains of Tennessee. A favorite pastime of Jerry's and Phyllis' was to travel and dance with the Johnny Knoor Orchestra. They were regular attendees of the dances held at Centennial Terrace in Sylvania, Ohio. Jerry and Phyllis also enjoyed traveling with their family. Annual vacations in the family station wagon took them from Florida to California. Highlights included anywhere out West, such as the Grand Canyon, Bryce Canyon National Park, Yellowstone National Park, the Grand Tetons and Jackson Hole, Wyoming. Other memorable trips included Hawaii, the World's Fair of 1967 in Montreal, Canada, touring the New England States and the Atlantic coast. After their children were raised, Jerry and Phyllis continued their joy of travelling with trips to the Canadian Rockies, six Caribbean cruises, and a family vacation to Disney World. In 2011, Jerry was invited to travel with the Society of Jesus on a trip to Spain and Italy, visiting the Roman Coliseum, the Vatican, Assisi, the Roman catacombs, Montserrat and more. Retirement was complimented with seasonal part-time employment. During the school year, Jerry was the parking lot attendant at St. John's Jesuit High School, and the school's Sacristan (1995 - 2018). Jerry often said, "this is the perfect retiree job!" In the summer months, he performed pool maintenance at the Bernath Village Condominium swimming pool. When he was off the clock, time was spent with family sharing his love of NASCAR (a Jeff Gordon fan), attending his grandchildren's' sporting events, camping, Frankenmuth MI, and frequent trips to McDonalds. On September 25, 2012, Jerry travelled to Washington, D.C. with Honor Flight of Northwest Ohio. All three Rossman brothers, Jerry, Leonard and Kenneth, along with good friend, Ed Shabnow, travelled together. Jerry said, "What a thrill that was to be able to take such a trip!" Jerry was preceded in death by his parents, his wife of 56 years, Phyllis J. (Burkett) Rossman, and grandson, Donald J. Rossman. Jerry is survived by his brothers, Leonard C. Rossman of Sylvania, and Kenneth E. (Patricia) Rossman of Eaton, Ohio, his three children, David A. (Diana) Rossman, Deborah J. Overton, and Brenda C. (Wayne) Welling, eight grandchildren, Brittany (Tim), Shannon (Brad), Melissa (Adam), Dustin (Fe), Meggin (Jen), Dane (Chey), Darcy and Sean, and fourteen great-grandchildren. The family requests contributions are made to St. Patrick of Heatherdowns Parish, or St. John's Jesuit High School. There will be a private family visitation at Coyle Funeral Home, 1770 S. Reynolds Rd. on Monday, December 28, from 5:30-7 p.m. with a Scripture service at 6 p.m. The funeral Mass will be celebrated on Tuesday, December 29 at 10:00 a.m. at St. Patrick of Heatherdowns Church, with burial at Resurrection Cemetery. Masks and social distancing is required. Please leave a condolence message for the family at CoyleFuneralHome.com.

Gerald "Jerry" R. Rossman, 93, of Toledo passed away Monday, December 7, 2020, at Hospice of NW Ohio in Toledo, Ohio. Jerry was born on September 18, 1927 to Alma and Arthur Rossman in their home located in Toledo, Ohio. A 1946 graduate of... View Obituary & Service Information

The family of Gerald Rossman created this Life Tributes page to make it easy to share your memories.

Send flowers to the Rossman family.