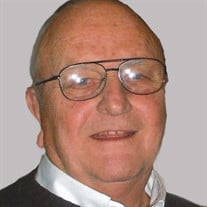 Gerald L. Mockensturm, age 87 of Toledo, passed away while surrounded by his family on January 12, 2022. He was born to Leo and Dorothy (Weisweber) Mockensturm on August 1, 1934. He proudly served his country in the U.S. Army. Jerry married the love of his life, Thelma Wonderly on October 5, 1957 and together they raised 5 children. He spent his career working as a Banker for First National Bank until the time of his retirement. Jerry was a godly loving man and was a member of the Perrysburg Monsignor Robert Yates 2800 Assembly and served as a 4th degree Knight. After Thelma passed away, he married Virginia (Lonsway) and together they sang in the Choir at Our Lady of Consolation in Carey, OH which traveled to Rome and sang for the Pope. He enjoyed farming, gardening, traveling and spending time with his family at the cottages he built at Lake Columbia. He was preceded in death by his first wife, Thelma; second wife, Ginny; his parents; brother, Daniel; sister, Marcella Bellamah and son-in-law, Daniel Artz. Gerry is survived by his children, Connie Artz, Carol (Gerry) Koch, Larry, Sue (Brian) Banas and Tim (Dana). He was loved and cherished by 10 grandchildren and 20 great-grandchildren. Visitation will be at the Coyle Funeral Home, 1770 S. Reynolds Rd., on Monday, January 17th from 3:00-7:00 p.m. where the Knights of Columbus will recite a Rosary at 7:00 p.m. A Funeral Mass will be held on Tuesday, January 18th at St. John XXIII Church, 24250 Dixie Hwy, Perrysburg, OH 43551, at 10:00 a.m where the family will begin greeting guests at 9:30 a.m. Interment Resurrection Cemetery. Memorials may take the form of contributions to Hospice of Northwest Ohio or St. John XXIII Church. Please view and sign our online "guest registry" at CoyleFuneralHome.com

Gerald L. Mockensturm, age 87 of Toledo, passed away while surrounded by his family on January 12, 2022. He was born to Leo and Dorothy (Weisweber) Mockensturm on August 1, 1934. He proudly served his country in the U.S. Army. Jerry married... View Obituary & Service Information

The family of Gerald L. Mockensturm created this Life Tributes page to make it easy to share your memories.

Gerald L. Mockensturm, age 87 of Toledo, passed away while surrounded...

Send flowers to the Mockensturm family.