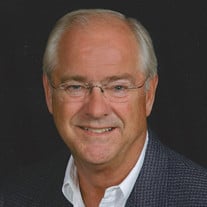 George Daniel Lehmann III “Dan” of Perrysburg, OH passed away peacefully on Wednesday, 9/11/2019. Dan was born on August 1, 1941in Toledo, OH to E. Lucille Shannon and George D. Lehmann Jr. Dan married Nancy Swartzbaugh , on April 27, 1968. He graduated from DeVilbiss HS, attended Whittenburg University and graduated from University of Toledo College of Business with a Finance degree. Dan was a licensed realtor and sold homes for Welles-Bowen Realty while finishing college at UT. He attended Naval OCS in Newport, RI graduating in July, 1967. His tours of duty included Pearl Harbor, DaNang and finally Newport where he taught and worked in administration before leaving the Navy as a full Lieutenant in 1971. Dan was in the insurance business for 34 years and held the designation of CPCU (Chartered Property Casualty Underwriter). Dan started his insurance career at Welles-Bowen in Fall of 1971. He was an independent agent and spent most of his time insuring property casualty and professional liability insurance. In 1983 Dan partnered with Bill Hummer, Ted Stec and Bob Cavalear to form Cavalear Insurance Agency. They grew the agency and through a new partnership formed the Celaris Group which was subsequently purchased by Sky Bank. Dan was interested in cars from an early age and Mercedes in particular. He joined his friend John Coppus, owner of Coppus Motors, in Tiffin and enthusiastically began selling Mercedes Benz cars. He loved talking about the products and meeting with his clients. He said his hobby became a second career. Dan was an active member of St. Michael’s in the Hills Episcopal Church and served as Senior Warden, and on numerous committees. He also was active in the Toledo and Ohio Independent Insurance Agents Associations serving as President of the Toledo chapter and ultimately President of the Independent Insurance Agents Association of Ohio, Inc. He is survived by his spouse, Nancy Lehmann and son, George D. Lehmann IV (Kelly) and grandsons, George D. Lehmann V and Charles W. Lehmann; brother, Robert W. Lehmann; sisters-in- law, Barbara Gravengaard (Philip), Beth Swartzbaugh, Kitty Ragan (James) and nieces and nephews: Liz Lugo (Jorge), Robert Lehmann, Amy Keller (Edward), Philip Gravengaard and Robert Ragan. He was predeceased by his parents, George and Lucille Lehmann and aunt and uncle, Rhoda and Robert Shannon. A Memorial Service will take place at St. Michael’s in the Hills, 4718 Brittany Road, Ottawa Hills, 43615 at 10 AM, Friday, September 20, 2019. Arrangements are being handled by Coyle Funeral Home. Memorial donations may be made to St. Michael’s in the Hills or Toledo Symphony, PO Box 407, Toledo, OH 43697. The family wishes to thank Dr. Timothy Kasunic MD and all the nurses at the Toledo Clinic Cancer Center on Holland Sylvania Rd. and the nurses and volunteers at the Hickman Cancer Center at Flower Hospital for their wonderful care. Please leave a condolence message for the family and view Dan’s Memorial Video Tribute at CoyleFuneralHome.com.

The family of George Daniel Lehmann III created this Life Tributes page to make it easy to share your memories.