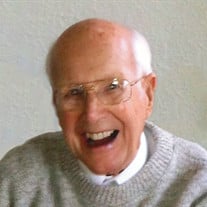 George A Finkler, age 98, went home to be with the Lord, on July 14, 2018, surrounded by his loving family, while living at Waterford at Levis Commons. George was born to Charles and Mary Finkler in Rudolph, Ohio on September 23, 1919 George served 4 years in the Army Air Corp during World War II at Patterson Air Force Base, in the Headquarters Squadron, Air Service Command. Early on George’s life was marked with tragedy when, at the age of 2, his mother succumbed to diphtheria, leaving his father in a difficult position of how to care for George and his sister Evelyn. The siblings were placed in a children’s home in Bowling Green and put up for adoption with the stipulation they could not be separated. Fortunately, a few years later his father re-married a young widow, Rilla Navarre Arquette. After the marriage, the first thing Rilla said was let’s go get my children so George now had the only mother he would ever know. George grew up in Point Place, but his father lost his home during the depression. In 1941, at his sister’s wedding in Glandorf, Ohio, he met the groom’s second cousin; and the future love of his life, a pretty blonde by the name of Edna Siefker. The two were eager to get married, but George was adamant about waiting until he had completed his service in the Army Air Corp. The couple were married at St. Michael’s Church in Kalida on June 5,1948. As a wedding present Edna’s father gave them their home on Beverly Drive, which at that time was still a dirt road. They were happily married for 60 years until Edna’s death. George was encouraged by his uncle who was a barber and his aunt a manicurist to become a barber. His barber shop was located on the corner of Spencer and Western for 10 years. The long hours and the job not to his liking, he took a correspondence course in accounting, where he found his niche and went on to become an accounting clerk with the City of Toledo and later a supervisor in the Water Department retiring in 1984. George was a member of OLPH from 1948 until his death. George sang in the choir at OLPH, was Treasurer of the OLPH St Vincent de Paul Society and local Chairman for Buckeye Boys State for a number of years. He was a member of the American Legion Vernon McCune Post 132 for over 45 years and the comptroller for more than 25 years. George was preceded in death by his parents, sister and the love of his life, Edna in 2008. George is survived by his two sons Michael (Rose) Finkler and James (Mary) Finkler, 11 grandchildren Air Force Lt Col Andrew (Kassia) Finkler, Ellen (Charles) Aring, Phillip (Adriann) Finkler, Michael (Andrea) Finkler, Patrick (Edith) Finkler, David (Kim) Finkler, Christopher (Jayme) Finkler, Donald (Kaitlyn) Finkler, Samuel (Katie) Farmer, Jessica (Spencer) Mills and Jonathan Farmer. George also has 20 great grandchildren Isabelle, Maxwell, Theodore, Kathryn, Lilly, Owen, Caleb, Noah,Gabriel, Liam, Chloe, Nicholas, Alexander, Nolan and Graham Finkler, Megan and Joel Aring, Delaney and Wesley Farmer and Emerson Mills. Friends may visit at the Coyle Funeral Home, 1770 S. Reynolds Rd., on Tuesday, July 17th from 2-8 p.m. where an American Legion Service will be held at 7 p.m. Funeral services will be held on Wednesday, July 18th beginning at 9:15 a.m., in the mortuary, followed by a Funeral Mass at Our Lady of Perpetual Help Church at 10 a.m. Interment Resurrection Cemetery. The Family would like to thank the care given to our father by the staff at Waterford and Hospice nurses and staff from Heartland Hospice. Please view and sign our online “guest registry” at CoyleFuneralHome.com

George A Finkler, age 98, went home to be with the Lord, on July 14, 2018, surrounded by his loving family, while living at Waterford at Levis Commons. George was born to Charles and Mary Finkler in Rudolph, Ohio on September 23, 1919 George... View Obituary & Service Information

The family of George Albert Finkler created this Life Tributes page to make it easy to share your memories.

Send flowers to the Finkler family.