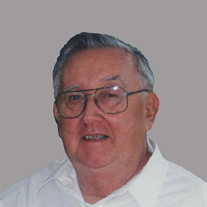 George R. Dansack, age 93 of Toledo, went to Father’s Heaven on November 29, 2017. He was born to Andrew and Elizabeth (Kovach) Dansack on April 2, 1924. He was a graduate of Central Catholic High School and then he went on to serve his country proudly in the U.S. Army during WWII. George spent his career working for the Toledo Blade in the Accounting Department for 44 years until the time of his retirement in 1986. He enjoyed photography, golfing, bowling, telling stories and family vacations. George was preceded in death by his wife of 28 years, Rita; second wife of 20 years, June; son-in-law, William Patterson and step-daughter, Debra Campbell. He is survived his by daughters, Cathy (Frank) Vlasak; Pat (Don) Smith, Bub (Ivan) Wynn, Sue (Bob) Crawbuck; grandchildren, Jeremy, Sarah, Dawn, Mike, Corey; great-grandchildren, Dekan, Oscar, Madi, Lili, Christopher, Caitlyn and Piper; sister, Betty (Dave) Phillips; step-daughters, Cheryl Densmore, Kyle Densmore, Sandra (Neil) Riddles and step-grandchildren, Matt, Deanna and Bryan. Friends may visit at the Coyle Funeral Home, 1770 S. Reynolds Rd., on Sunday, December 3rd from 2-6 p.m. Funeral services will be held on Monday, December 4th beginning at 9 a.m., in the mortuary, followed by a Funeral Mass at Christ the King Church at 10 a.m. Interment Calvary Cemetery. The family would like to extend a special thank you the staff at Kingston Residence of Sylvania and Ohio Living Hospice for their compassionate care. Memorials may take the form of contributions to the Old Newsboys and to Ohio Living Hospice. Please view and sign our online “guest registry” at CoyleFuneralHome.com

George R. Dansack, age 93 of Toledo, went to Father&#8217;s Heaven on November 29, 2017. He was born to Andrew and Elizabeth (Kovach) Dansack on April 2, 1924. He was a graduate of Central Catholic High School and then he went on to serve... View Obituary & Service Information

The family of George Richard Dansack created this Life Tributes page to make it easy to share your memories.

Send flowers to the Dansack family.