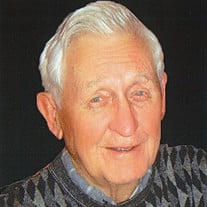 Gene Meredith McKenna, 95, of Toledo, OH, passed away peacefully, surrounded by his family, on February 5, 2021. He was born to Mabel and Charles F. McKenna on August 20, 1925 in O'Neill, Nebraska. He is preceded in death by his brother Hugh McKenna, his wife of 63 years, Eunice Alice (Bates) McKenna and his son Terry Joe. He is survived by his children, Charles (Wendy) McKenna, Fr. Ken McKenna, OSFS, Laura (Rob) Biegner, Julie (Pete) Ferguson, and grandchildren Faith and Melissa McKenna, Matthew and Alexandra Biegner, Ian, Riley, Bridget and Daniel Ferguson. Gene proudly served his country in the United States Army Air Corps as a bombardier flying in B29's in the Pacific arena in WWII. He returned home and graduated from the University of Nebraska in 1950. He met his loving wife in Cleveland, OH and married her in Aliquippa, PA on February 20, 1954. He spent several years working as a special agent in the Federal Bureau of Investigation before beginning a thirty year career in management with Jeep/Renault/Chrysler Automotive. Gene's favorite pastime was golf, and he also enjoyed reading, playing cards, and time with his children and grandchildren. Gene will be long remembered for his gentle kindness, sparkling blue eyes and quick wit. Gene's memorial mass will be scheduled this summer. Details will be available on social media. The family will attend a private interment at Calvary Cemetery this week. Due to current conditions caused by the ongoing pandemic, we are offering a Live Stream of the Funeral Mass for Gene McKenna beginning at 6:45pm on Monday, February 8, 2021 for those who wish to attend the Mass virtually. To view a recording of the Funeral Mass from Monday, February 8, 2021 for Gene please CLICK HERE. In lieu of flowers, memorials may be made to Gesu Church or the Oblates of St. Francis de Sales. Please view and sign our online "guest registry" at CoyleFuneralHome.com

Gene Meredith McKenna, 95, of Toledo, OH, passed away peacefully, surrounded by his family, on February 5, 2021. He was born to Mabel and Charles F. McKenna on August 20, 1925 in O'Neill, Nebraska. He is preceded in death by his brother Hugh... View Obituary & Service Information

The family of Gene McKenna created this Life Tributes page to make it easy to share your memories.

Send flowers to the McKenna family.