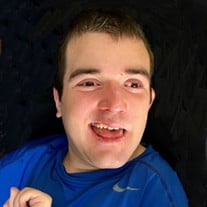 Gavin Engle, 18, of Haskins, Ohio passed away January 30, 2018 surrounded by his loving family. Gavin was born June 12, 1999, an extraordinary child, whose sole purpose was to amaze those around him with his strength and joy of living. Not expected to survive his first 6 months, Gavin lived a quality filled life, surrounded by family and friends who adored him. Although he never spoke words, Gavin was understood by many. Some of his favorite memories were travelling to baseball games and tournaments over the last 13 years, as a Jaguar, with his Greater Toledo Challenger Baseball Little League family. Gavin loved basking in the sun, floating in the water, and all things musical; especially the bells he frequently wore on his wrist. Gavin attended Woodlane School where he not only received therapy and educational programming but had many friends and teachers who enjoyed being a part of his life. Gavin was loved by many, especially his parents Angie Engle and Eric Sandvik; sister Calleigh Sandvik; grandma Sandy Engle; aunt Erica Engle; great-grandma Joyce Engle; great aunts Pam (Rick) Ketzenbarger, Bonnie Long, and Terri Strow; grandparents Gerry Sandvik, Rick (Kelly) Engle; special cousin Braelyn Smith; and numerous family members, teachers, aides, doctors and nurses. He was welcomed to Heaven by his great grandma Thelma Holzhauer and grammy Bernetta Sandvik and all the other warriors, he has met during their lives, who like Gavin were awe inspiring. Friends are welcomed at the Coyle Funeral Home, 1770 S. Reynolds Road, Toledo, Ohio, on Saturday, February 3, 2018 from 12 – 5 p.m. where a funeral service will be held at 5 p.m. Interment will be private. In lieu of flowers, memorial contributions may be made to The Greater Toledo Challenger Little League, 4544 Country Walk Lane, Sylvania, OH 43560.

Gavin Engle, 18, of Haskins, Ohio passed away January 30, 2018 surrounded by his loving family. Gavin was born June 12, 1999, an extraordinary child, whose sole purpose was to amaze those around him with his strength and joy of living. Not... View Obituary & Service Information

The family of Gavin Engle created this Life Tributes page to make it easy to share your memories.

Send flowers to the Engle family.