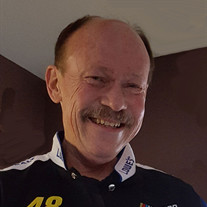 Gary Robert Turner Gary Turner, 65 years old of Maumee, Ohio, passed away peacefully in his home surrounded by his loving family on July 31, 2017. Gary was born in Richmond, Indiana, on June 11, 1952 to Robert (Bob) and Matilda (Tillie) Turner. He was a 1974 graduate of Ball State University. Gary was the Sales Manager in the Toledo region for ChemCentral for 18 years; he went on to work for BAX/BX Solutions as a supervisor in the warehouse located on the grounds of the Toledo Express Airport. Gary’s last years of working were spent at ThyssenKrupp as an Inventory Specialist, recently retiring. His hobbies were many, but he mostly loved fishing, NASCAR, traveling the United States with his wife, needlepointing while watching his favorite football team, the Green Bay Packers, and working in his yard. Out of all of his travels, he fell in love with the town of Green Bay, Wisconsin, after watching the Packers play at home in Lambeau Field. Gary is survived by his loving wife Diana; daughter Angie (Doug) Rechtine; granddaughter Ava Rechtine; step-children Mitzi (Tom) Toland, Darrell (Brittnie) Blankenship, Darren Blankenship; 9 step grandchildren; siblings Barbara (Mark) Whalen, Larry (Pam) Turner, Janice (Ted) Server, Susie (John) Fifer; Ronnie (Marcie) Turner and his nieces and nephews and his canine friend, Boomer. Preceded in death by his parents, Bob and Tillie Turner, maternal and paternal grandparents, and nephew, Benjamin Fifer. Friends may visit at the Coyle Funeral Home, 1770 S. Reynolds Rd. on Thursday, August 3rd from 2-8 pm. Funeral services will be held on Friday, August 4th at Maumee Valley Church, 8715 Garden Rd., Maumee, Ohio 43537, at 1:00 pm where the family will greet guests from 12:00 to 1:00 pm. Interment services will be held on Saturday, August 5th at St. Andrews Cemetery in Richmond, Indiana.

The family of Gary Robert Turner created this Life Tributes page to make it easy to share your memories.

Send flowers to the Turner family.