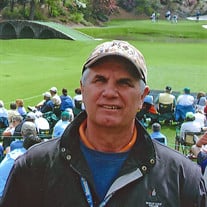 Garrett “Garry” Snyder, age 70, of Toledo, passed away at St. Luke’s Hospital on Tuesday, December 24, 2019, surrounded by his loving family. He was born on September 27, 1949 in Toledo, Ohio to Donald and Stephanie (Krolak) Snyder. Garry was a graduate of Start High School which was followed by his service to our country in the U.S. Navy. After returning from Hawaii, Garry received an Associate’s Degree in Engineering from the University of Toledo. He retired from GM Powertrain in 2007 after 34 years of service. Garry loved the game of golf, the outdoors, music, and his family. He married the love of his life Joann (Kosakowski) and they would have celebrated 50 years of marriage in April. Along with his wife, Garry is also survived by his sons, Brian (Ellie), Garrett Jr. and daughter Deanna (Andrew) Iiams; grandchildren, Brent, Andrew, Paige, Rowan and Oliver. Additionally, he is survived by his siblings Mike, Gloria, Monica (Greg) Ford, and Don (Vicki), three nieces and a nephew. Garry was preceded in death by his parents, step-father, George Wolinski and sister-in-law, Cindy Snyder. Friends may visit at the Coyle Funeral Home, 1770 S. Reynolds Rd., on Monday, December 30th from 2:00-8:00 p.m. A Funeral Mass will be held on Tuesday, December 31st at St. Patrick of Heatherdowns Church, 4201 Heatherdowns Blvd., Toledo, OH 43614, at 10:00 a.m. Interment will be private. Memorials may take the form of contributions to the Parkinson’s Foundation. Please view and sign our online “guest registry” at CoyleFuneralHome.com

The family of Garrett R. Snyder created this Life Tributes page to make it easy to share your memories.

Send flowers to the Snyder family.