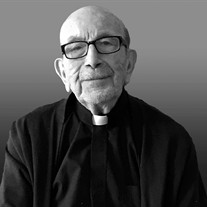 Brother Frederick Chiappone, O.S.F.S. died peacefully at Flower Hospital, in Sylvania, OH, on November 19, 2020. Bro. Fred was 101 years old. His death comes following a diagnosis of and complications from COVID 19. Bro. Fred was born in Niagara Falls, NY, to John and Rose (Nuzio) Chiappone on June 10, 1919. He is preceded in death by his parents and his sister, Dorothy (Chiappone) McCullum. He is survived by a niece, Ms. Rose Jakobus of Spokane, WA. Bro. Fred graduated from Niagara Falls High School in 1928 and received a Bachelor of Science Degree from Niagara University in 1949. Bro. Fred was inducted into the U.S. Army on March 20, 1941 and served during World War II. While in the service he earned an American Defense Ribbon, an American Campaign Medal for the European African-Middle Eastern Campaign, and a Good Conduct Medal. He was honorably discharged from the Army on November 8, 1945. Bro. Fred entered the Oblate Novitiate in Childs, MD on September 1, 1953 and made his first vows on May 21, 1955. He made his final profession at Northeast Catholic High School in Philadelphia, PA on June 23, 1960. Bro. Fred spent most of his ministerial life as a high school chemistry teacher, having taught in his early years at Northeast Catholic High School, Philadelphia 1955-1960 and 1961-1964. He taught at Salesianum High School in Wilmington, DE from 1960-1961. His most extensive period of teaching took place at Bishop Duffy High School in Niagara Falls, NY 1964-1980. During this time he also served as the chaplain to the local society of the Daughters of St. Francis de Sales. Due to ill health and advanced age, in 2015 Bro. Fred moved to Rosary Care Center, a nursing facility in Sylvania, OH operated by the Sisters of St. Francis. He remained there until he was moved to Flower Hospital a few days before his death. Bro. Fred had a curious mind, always interested in learning new things. Recently he requested a dictionary so he could increase his vocabulary. He was especially interested in mechanical things, and in particular, computers. He could speak for hours about his adventures and misadventures working with computers. Fred also volunteered with a local charity in Niagara Falls, NY, working at summer camps for children with cerebral palsy. The Mass of the Resurrection will be celebrated on Tuesday, November 24, at 7:00 p.m. at St. Pius X Parish, 3011 Carskaddon Ave. Toledo, OH, 43606. Visitation will take place at St. Pius X prior to the Mass beginning at 6:00 p.m. Burial will be at Resurrection Cemetery, Toledo. Condolences may be sent to his niece, Ms. Rose Jakobus, 17543 Smythe Rd., Spokane, WA 99224 or by a message at CoyleFuneralHome.com. Memorial contributions may be sent to: The Oblates of St. Francis de Sales, P.O. Box 2868, Toledo, OH 43606. Coyle Funeral Home is assisting the arrangements.

The family of Fredrick John Chiappone, O. S. F.S. created this Life Tributes page to make it easy to share your memories.

Send flowers to the Chiappone family.