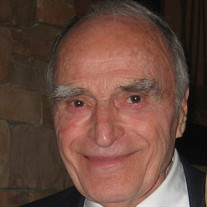 Frederick Carl Wegener, age 93, of Toledo Ohio passed away February 14th, 2021 at Northport Highlands in Northport, Michigan. Fred is survived by his sister, Elizabeth Wegener of Toledo, his son, Mark Frederick Wegener (Lori Daniels) of Maple City, Michigan, his daughter, Becky Wegener Kaplan (Robert Mance) of San Diego, California, his grandchildren Matthew Wegener (Maryetta Houghton), Sarah Davidson (Chris), Emily Ray (Scott) and his great grandchildren Lola, Cooper and Benjamin. Fred was preceded in death by his loving wife, Patricia Ann Cooper, his parents Frederick Wegener and Gertrude Staab, sisters Anna Mueller, Gertrude Weter, Ruth Schaal, Alma Beck and his son-in-law Joshua Kaplan. Fred was born April 11, 1927 and grew up in the old west end of Toledo. He graduated from Woodward High School in 1945. After high school he enlisted in the Navy and served for 14 months. On Sept. 1, 1950 he married Patricia Cooper. Fred was a brick mason and was a 50+ year member of the International Union of Bricklayers and Allied Craftworkers (Local #3 Toledo). He was active in his church, being a longtime member of Saint James and Saint Patrick's of Heatherdowns parishes. Fred had a long, happy and healthy life. He adored his wife. They met when he asked her to dance at Centennial Quarry Terrace. They loved to dance, slow dancing, so they could hold each other. Fred and Pat were a perfect match and they had 51 incredible years together. He was a wonderful father who always placed family first. He was so proud of his grandchildren and felt very lucky to see them grow up and give him great-grandchildren. Fred also loved and participated in the lives of his sisters and their families. In the last few years of his life his health declined. His many nieces, nephews and their families came together to help navigate this difficult period. Fred spent his last 1 ½ years in Michigan. Being 92 and in poor health it was not easy for him to leave Toledo, but he felt safe and secure knowing he was near Mark and Lori. A Memorial Mass is planned for Friday, July 9, 10:30 a.m. with an hour of visitation prior at the Historic Church of St. Patrick, downtown Toledo. Interment will be at Resurrection Cemetery. The family wishes to thank all the friends and neighbors who were such a big part of Fred's life. He lives in all of our hearts. Memorials in Fred's name may be directed to Munson Healthcare Hospice, 1005 Sixth St., Traverse City, MI, 49684 or a favorite charity of your choice. Coyle Funeral Home is assisting the family with arrangements. Please leave a condolence message at CoyleFuneralHome.com. "They are not gone who live in the hearts they left behind." Native American Proverb

The family of Frederick Carl Wegener created this Life Tributes page to make it easy to share your memories.

Send flowers to the Wegener family.