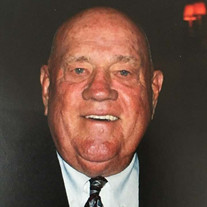 Frank W. “Cub” Cubbon, Jr. died peacefully on December 25, 2018 at the age of 92. A dutiful and loving son, devoted husband, and caring father, grandfather and great-grandfather, he was also an extraordinary trial lawyer and left an indelible mark on all who knew him. He will be sorely missed. Frank was born in Cleveland, OH, to Frank W. Cubbon, Sr. and Eunice Viola Baker Cubbon. Raised in Plummer, PA, he attended a four-room schoolhouse through eighth grade before attending high school in Oil City, PA. While attending Allegheny College in Meadville, PA, he met the absolute love his life, Barbara “Babs” Davies. With his education interrupted by Army service in Italy during the occupation, he returned to Allegheny and Babs and he were married on December 28, 1948. That blessed union lasted 69 years until Babs death in December 2017. Upon graduation from college the couple moved to Raleigh, NC, where Frank attended law school at Duke University for one year. With one young son and a daughter on the way, Frank’s G.I. Bill benefits were exhausted, so as fate would have it, they moved to Toledo so he could complete his education at the University of Toledo’s night law school, allowing him to support his family working as an insurance adjuster during the days. Graduating from law school in 1953, Frank opened his own practice and soon after formed a partnership with the late Bernard D. Rice. His experience as an insurance adjuster proved invaluable as he concentrated his practice on plaintiff’s personal injury law, becoming a prominent trial attorney and trying scores of cases in courts throughout Ohio, Michigan and Pennsylvania. He was a frequent lecturer on law at conferences throughout the country, and spent one memorable semester teaching trial practice at the UT College of Law. Through many iterations and many attorneys, after 65 continuous years, Cubbon and Associates remains a very well-respected plaintiff’s personal injury firm in Toledo. While a recitation of Frank’s professional accomplishment would take many columns of this newspaper, it would pale in comparison to his achievements as a family man. An only child himself, he and Babs ultimately had nine children. The family grew up in a large home on Dorr Street with endless activities, animals, yardwork, tractors, mini-bikes, go-carts and driving lessons for anyone who could reach the pedals in their field next door. Frank was at the heart of memorable summer parties, fishing trips to Canada, “Big Burns” on New Year’s Day, take out Chinese food for 11 from The Golden Lilly, days of raking then burning oak leaves in the fall, giving the kids presents on his birthday, buying anything in bulk long before Costco, and especially wonderful family dinners filled with discussion, debate and many lessons learned. One unexpected lesson our father taught us was the fact that people over 90 can literally take their dog anywhere they want and get away with it! His later years were certainly enhanced by his dog, Lily. No portrait of our father would be complete without a discussion of his generous nature. He was very much a self-made man who strongly believed that with success came an obligation to help others, and he demonstrated that with his time and treasure. He was supportive of every school anyone in the family ever attended, and particularly the University of Toledo and a multitude of charities. He was especially generous with and compassionate for individuals down on their luck or otherwise in need. As a father, he taught by word and even more so by example. His word was his bond. He lived the Golden Rule. He demonstrated integrity in everything he did. He treated others with respect and empathy. He considered education the greatest gift, and took great pride in the fact that his nine children together earned 15 college or graduate degrees As a husband, he loved our mother with all of his heart and they were a true team in every respect. They loved raising their large and often loud family, they loved growing old together, golfing, playing hearts, taking dozens of fishing trips throughout the US and Canada, and simply spending time together. He made the best of his life as a widower but never stopped missing our mother, remembering only the best of their times together. In addition to his wife, Frank was preceded in death by his sons William and Richard. He is lovingly survived by children, Frank (Pam) Cubbon, III, Kay (Thomas) McArdle, Kyle (Spiros Cocoves) Cubbon, Stuart (Denise) Cubbon, Barbara (Eric) Beale, Amy (Mark) Bliton and Thomas Cubbon, along with grandchildren, Kile (Michelle) McArdle, Megan (Bjorn) Hammer, Andrew (Anna) McArdle, Tasso and Athena Cocoves, Jocelyn (Billy) DeMars, Stuart (Christine) Cubbon, Jr., Natalie (Kevin) Crotte, Phillip Cubbon, William, Caitlin (Alex Mroz) and Joseph Cubbon, Emma, Audrey and Myles Beale, Jackson (Jen) and Chloe Bliton and Logan (Brittany) Cubbon, great-grandchildren Francie, Liv and Mae Hammer, Aiden McArdle, Quinn, Nora, and Billie Catherine DeMars, Stuart Cubbon, III, and Thomas Rio Crotte as well as his brother-in-law, Richard (Jennifer) Davies and sister-in-law, Lou Davies. A Celebration of Frank’s Life will be held Saturday, January 5, 2019 at The Toledo Club, 235 14th Street, Toledo, OH from 1:00 pm to 3:00 pm with family reflections at 2:30 pm. Memorial contributions may be made to the Barbara D. Cubbon Endowed Business & Leadership Scholarship at Lourdes University, the University of Toledo College of Law, Citizens for Metroparks of Toledo or to the charity of the donor’s choice.

Frank W. &#8220;Cub&#8221; Cubbon, Jr. died peacefully on December 25, 2018 at the age of 92. A dutiful and loving son, devoted husband, and caring father, grandfather and great-grandfather, he was also an extraordinary trial lawyer and left... View Obituary & Service Information

The family of Frank Cubbon Jr created this Life Tributes page to make it easy to share your memories.