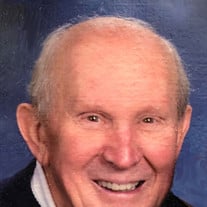 Francis John "Frank" Zigray, age 85, of Maumee, Ohio passed away March 24, 2022 at St. Luke's Hospital. He was born September 8, 1936 in Toledo to Mary and Andrew Zigray Sr. Frank proudly served his country in the US Army from July, 1957 through June, 1959. Following his military service, he attended the University of Toledo and graduated with a Bachelor Degree in Business. Frank became a CPA and worked his entire career in corporate accounting. He was most proud of his computer and technical skills and was once even featured in a magazine published by IBM. He could often be found in his retirement years working in his home office on taxes or personal finance. He became quite fond of his Apple iPad in his later years and was often scolded as being like a teenager! Frank enjoyed golfing, cross-country skiing and reading, but the most important part of his life was his family and his wife of 62 years, Joan. He is survived by his loving wife, Joan; children, Ellyn (Ron) Siebenaler, Dan Zigray and Ann (Kevin) Heban; grandchildren, Ron and Lauren Siebenaler, Kenny and Alex Heban, Kirsi (Mitch) Cochell, and Julia and Steven Zigray; siblings, Andrew "Bud"(Theresa) Zsigray, Joe (Janice) Zigray, and Tom (Connie) Zigray; beloved sister-in law, Jean Biro. Frank was preceded in death by his parents, in-laws, Emery and Mary Biro, his older brother, Robert (Dolores) Zigray, and brother-in-law Emery (Beth) Biro II. Visitation will be held on Wednesday, April 6, 2022 beginning at 9:30 a.m at St. Joan of Arc Catholic Church, 5856 Heatherdowns Blvd, Toledo, OH, and will be followed by the Funeral Mass at 11a.m. Interment will follow later in the day at Calvary Cemetery. Memorial contributions may be directed to St. Joan of Arc Catholic Church or to Wounded Warrior Project. Please leave a condolence message for the family at CoyleFuneralHome.com

Francis John "Frank" Zigray, age 85, of Maumee, Ohio passed away March 24, 2022 at St. Luke's Hospital. He was born September 8, 1936 in Toledo to Mary and Andrew Zigray Sr. Frank proudly served his country in the US Army from July, 1957... View Obituary & Service Information

The family of Francis John Zigray created this Life Tributes page to make it easy to share your memories.

Send flowers to the Zigray family.