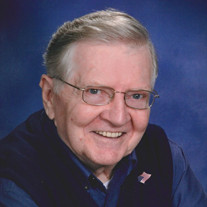 Francis L. “Frank” Skeldon, III, age 82, passed away peacefully on August 20, 2019 surrounded by his family and friends. Frank was born on August 25, 1936 in Toledo, Oh to Francis L. Skeldon, Jr. and Catherine (Scanlon) Skeldon. He was a 1954 graduate of Central Catholic High School. Frank proudly served in the U. S. Marine Corps, and then worked for the Jeep Plant. His love for adventure took him both to Denver, Colorado and Yankton, South Dakota for over 30 years, where he worked in logistics management, and finally returned to Toledo. During most all of his life, Frank was a proud 40 year member of the fellowship of Alcoholics Anonymous. He taught the true essence of the 12 step program, and was a sponsor to many men in recovery. Frank enjoyed the Denver Broncos, walking, and BINGO. Frank was preceded in death by his parents and his sisters, Elizabeth Hipp and Mary Sue Hare. He is survived by his sisters, Kathy Woodward and Therese Mitchell, many nieces, nephews, cousins and dear friends. Visitation will be held at Coyle Funeral Home, 1770 S. Reynolds Rd. on Friday, August 23, from 2-8 p.m. with a Scripture Service and Sharing of Memories at 7. The funeral will begin at Coyle on Saturday, August 24 at 9:30 followed by Mass at OLPH church, where Frank was a lifelong member. Burial will be at Calvary Cemetery. Memorial donations may be given to the Adams House or the Open Door Men’s Ministries. Please leave a condolence message and view Frank’s Memorial Video at CoyleFuneralHome.com.

The family of Francis "Frank" Leroy Skeldon created this Life Tributes page to make it easy to share your memories.

Send flowers to the Skeldon family.