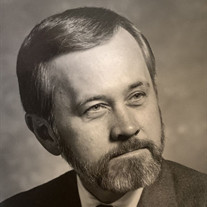 The Honorable Francis X. Gorman, 81, passed away on Tuesday, November 9, 2021, at his home surrounded by his family. He was affectionally known to his friends and family as "Mickey." He was born on September 22, 1940, to Lawrence and Josephine Gorman, in Toledo, OH. He was particularly proud of his Irish heritage and visited Ireland often to mingle with the Irish, and feel the sod of his immigrant grandparents under his feet. A member of the first graduating class of St. Francis de Sales High School in 1958, he continued to be an active supporter of the school's activities until his death. After earning a degree in English Literature from the University of Toledo and service as Student Body President his senior year, he went on to graduate from Toledo Law School and enter the practice of law in his beloved home town. Prior to being sworn onto the bench, he specialized in labor law, employment discrimination, and civil rights law. He was especially proud of being plaintiff's counsel in the 1972 historic case of Jones v. Wittenberg, in which the Federal Court ruled that jail inmates have a right to be held in humane and favorable conditions. He was elected to the bench in Toledo Municipal Court in 1987, where he served for 24 years, until retiring in 2011. He was greatly admired for his fairness on the bench and often regarded himself as a "social worker," with a focus in rehabilitation and lowering recidivism rates in the community. While he treated his role on the bench with the upmost seriousness, he is remembered among his colleagues, attorneys, and the community, for his occasional irreverence while presiding over various matters on the bench. He was a founder and member of the Court Diagnostic and Treatment Center and served as a Board Chairman for many years. He also served on the Supreme Court Of Ohio's Traffic Rules Committee, Labor Management System Society (LMS), served twice on the Ottawa Park Board, and was a founding member and chairman of the Toledo Clinic Foundation. Judge Gorman's distinguished career as a lawyer and judge never took precedent over his roles as a father, husband, and friend. He loved spending time with his family and was always proud of his daughters' accomplishments. He was known for his gift of storytelling, mischievous sense of humor and lightheartedness. He was an avid sailor, reader, scenic photographer, cyclist, World War II military collector who enjoyed raising Border Collies and listening to classical and folk music. He also enjoyed traveling to the Atlantic Coast and Great Lakes. He is survived by his two daughters, Kathleen Gorman of San Francisco, CA, and Clare (Andrew) Gottschlich of Columbus, OH; brother, Lawrence Gorman of Richmond, VA; companion, Marie Saeger of Silver Springs, MD; and seven nieces and nephews. He was preceded in death by his beloved wife Susan. A Memorial Mass will be held on November 18, 2021, at 2 p.m. at St. Patrick's Historic Church, 130 Avondale Avenue, in Toledo. In lieu of flowers, contributions are suggested to the Toledo Symphony, Toledo Humane Society, or St. Francis de Sales High School. Arrangements have been made with the Coyle Funeral Home. Please share memories and condolences with the Gorman family at www.coylefuneralhome.com/obituaries/ .

The Honorable Francis X. Gorman, 81, passed away on Tuesday, November 9, 2021, at his home surrounded by his family. He was affectionally known to his friends and family as "Mickey." He was born on September 22, 1940, to Lawrence and Josephine... View Obituary & Service Information

The family of The Honorable Francis X. Gorman created this Life Tributes page to make it easy to share your memories.

The Honorable Francis X. Gorman, 81, passed away on Tuesday,...

Send flowers to the Gorman family.