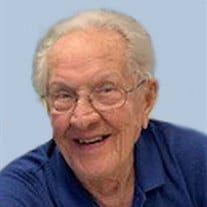 Eugene “Gene” K. Ahrendt, 91 of Lambertville. Mi., and a longtime resident of Point Place, passed away Thursday July 30, 2020 in his home surrounded by his loving family. The son of John and Linda Ahrendt, he was born in Toledo, Ohio March 9, 1929. He met the love of his life, Bonnie Lee Trace while riding horses at the Lost Peninsula stables. They married August 27, 1949 and shortly thereafter he took a job at the former Tiedtke’s as a toy buyer. In 1956 Gene went to work for the Art Mosaic and Tile Co. where he worked his way up until he purchased the company in 1976, becoming Gene’s Art Mosaic & Tile Co. His company worked on several large projects in Toledo including 1 Government Center, the Hotel Sofitel, the Toledo Museum of Art, schools, hospitals and other projects in Northwest Ohio.Gene enjoyed many activities with his children including coaching little league baseball with Randy Rydman, attending youth hockey tournaments and driving the church bus for the youth group at Messiah Lutheran Church, where he was a member for 50 years.After his retirement he and his wife became snowbirds, wintering in Yuma, AZ, where he enjoyed golf all year long and they made many wonderful friends. On returning to the Toledo area, they joined Olivet Lutheran Church where he was active in ushering and New Life.He was preceded in death by his parents, stepfather Clark “Red” Wells and brothers Richard and John “Jack” Ahrendt. He is survived by his loving wife of 70 years, Bonnie; children Dianne (Joseph) Stockdale, Julie (Michael) Navarre, Teri (Gary) Hanenkrath and Joel (Cinnia Tillman) Ahrendt; grandchildren Lindsay (Christopher Marriott) Navarre, Lauren (Erik) Danskin, Kathryn (Brandon) Fields, Erin (Brett) Braun, Amanda (Nick) Mosher, Andrew (Rachel) Hanenkrath, Emily (Jason) Earp and David (Rachael) Navarre ;11 great-grandchildren with two on the way as well as half sister Mary Ann Russell and brother-in-law Robert(Gay) Trace.Due to the pandemic, funeral services will be private. The family would like to thank his caregivers, Marianne and Kristi from Pro Medica Hospice for their compassionate care. Memorials may take the form of contributions to Olivet Lutheran Church, 5840 Monroe St., Sylvania, Ohio 43560. Arrangements by Coyle Funeral Home. Please view and sign our guest registry at coylefuneralhome.com.

Eugene &#8220;Gene&#8221; K. Ahrendt, 91 of Lambertville. Mi., and a longtime resident of Point Place, passed away Thursday July 30, 2020 in his home surrounded by his loving family. The son of John and Linda Ahrendt, he was born in Toledo,... View Obituary & Service Information

The family of Eugene "Gene" Ahrendt created this Life Tributes page to make it easy to share your memories.

Send flowers to the Ahrendt family.