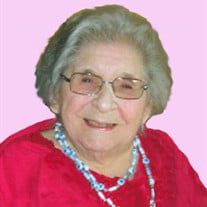 Erma, a second pandemic survivor, went to her "Great Reward" on April 27, 2021. She was born on September 4, 1917, to Louie and Zoe Hooker in New Washington, Indiana. She was the fourth child in the family, born two weeks after the death of her sister Elsie, who died of tetanus. Erma was raised on a small farm with a brother and three sisters. She graduated from New Washington High School in 1935 and from Bryant Stratton Business College in Louisville, Kentucky. While living in Louisville becoming an independent woman, she met Art Jirinec, a young service man stationed at Fort Knox. They met at a dance sponsored by the Y. Art was from Toledo, Ohio. After a long distance engagement, they married Dec. 18, 1943. Art was serving his country in the Battle of the Bulge as a body guard for the Captain. Erma worked as an ammunitions inspector for the government. After WWII, Art came back to southern Indiana to bring his bride to their home in Toledo. They moved into their house on Walbridge Avenue Dec. 12, 1945. Later, they would have two daughters, Linda and Sally. Erma was a stay at home mom who loved being a wife, mother, and homemaker. Their home was surrounded by Art's family and she took care of everyone. She was very active at Peace Lutheran Church for her entire married life and raised the girls to be children of God. Art died at the age of 63 in 1979. Erma transferred her church membership to St. John's Lutheran Church after Peace closed. She lived for her family, enjoying trips to Las Vegas to visit Linda, Jack and Jessie. Always loved her visit home to see her siblings in Indiana. Erma was a widow for nearly 42 years, enjoying every day baking her popular pies, cookies and cakes for family and reading to grandchildren. She lived on Walbridge Ave. for 70 years. After a fall, she moved to her daughter and son-in-law's home near Waterville until 2018 when she was admitted to the hospital and then to Bowling Green Manor. Erma was in quarantine for a year before Sally was able to come into her room due to the covid outbreak. She survived covid. Erma was preceded in death by her parents and brother, Joe Hooker; sisters, Violet Armand, Elsie Hooker, Crystal Wilson, Doris Neal; husband, Arthur Jirinec; son-in-law, Jack Fink and daughter, Linda Fink. She is survived by daughter, Sally (David) Bennett; grandchildren, David (Emily) Bennett II, Julie Bennett Lowry, Jessica Fink, Michael (Katherine) Bennett, and Andrew (Katherine) Bennett; nine great grandchildren, Katie and Ally Lowry, Clare, Raquel and Daniel Bennett, Violet and Lianna Bennett and Charlie and Samuel Bennett, as well as many loving nieces and nephews. Thanks and appreciation goes to the staff of Bowling Green Manor and Hospice of NW Ohio, for their love, care and concern for Erma and her family. Too many wonderful people to mention. Also, many thanks to Pastor Daniel Mohr and Pastor Daryl Hanson for their visits and prayers. Visitation will be Saturday, May 8th at 10:00 a.m. at Coyle Funeral Home, 1770 S. Reynolds Rd. Funeral services will follow at noon. Burial will be at Toledo Memorial Park. Memorials would be welcomed at St. John's Lutheran Church, 708 S. Erie St. Toledo, Ohio or Disabled American Veterans. Please leave a condolence message for the family at CoyleFuneralHome.com

Erma, a second pandemic survivor, went to her "Great Reward" on April 27, 2021. She was born on September 4, 1917, to Louie and Zoe Hooker in New Washington, Indiana. She was the fourth child in the family, born two weeks after the death of... View Obituary & Service Information

The family of Erma H. Jirinec created this Life Tributes page to make it easy to share your memories.

Erma, a second pandemic survivor, went to her &quot;Great Reward&quot;...

Send flowers to the Jirinec family.