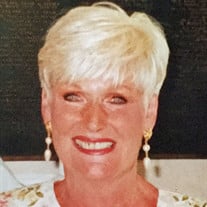 Elizabeth “Betty” A. Bailey (née Wilkinson) of Toledo passed away unexpectedly at St. Luke’s Hospital on Wednesday, March 14, 2018. Betty was born in Youngstown, Ohio, on September 13, 1940, and raised by her parents, Howard and Margaret Wilkinson. After graduating from Bedford High School in 1958, Betty attended Kent State University, where she earned a bachelor’s degree in Sociology. She was employed by United Airlines as a flight attendant, and later by the Lion Store, from which she retired in 1999 as a department manager. Betty most enjoyed spending time with her grandchildren and traveling with friends, including a few high school classmates with whom she remained close. She took regular trips to Vermillion, Ohio, and to the beaches of Florida, and in 2016, she and her dear cousin, Elaine, visited Italy for the first time. Betty was a proud and devoted mother, an adoring grandmother, a generous and loyal friend, and an avid Cleveland Indians fan. She faced life’s challenges with dignity and poise, and comforted others with her characteristic blend of heartfelt warmth and unique humor. She served as a touchstone to many, and her compassionate ear and sage advice will be sorely missed. Words cannot justify how special Betty has been and will continue to be in the hearts of her family and friends. She was honest, kind, and fun. She was liberal with hugs and with taking loved ones out for drinks, and was caring enough to call the next morning to check up. Those hugs, those shared drinks, and that voice on the other end of the line will be remembered fondly and often. Betty was preceded in death by her brother, Robert, and her beloved son, Michael. She is survived by her second son, Geoffrey (Ann); grandchildren, Justin and Allison; and nephew, David. Visitation will be held from 4-6 p.m. on Tuesday, March 20, at Coyle Funeral Home, 1770 S. Reynolds Road in Toledo, with a Memorial Service to follow directly. Interment will be private. Please view Betty’s Memorial Video tribute and leave a condolence message at CoyleFuneralHome.com.

The family of Elizabeth Ann Bailey created this Life Tributes page to make it easy to share your memories.

Send flowers to the Bailey family.