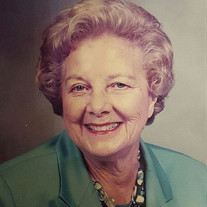 Eileen Ann (Moore) Adams died peacefully on December 9, 2018 at Ohio Living Swan Creek Retirement Village. She was born on Aug. 17, 1921 in Toledo, OH, to George S. Moore, Sr. and Mary E. (Heyes) Moore. She had two older brothers, George Moore and Harold Moore, both of Toledo. She met the love of her life, James R. Adams of Toledo, in first grade at St. Charles Borromeo School in S. Toledo, in 1927, and she graduated from St. Ursula Academy in 1939. After high school, Eileen went to work for Bell Telephone Co., becoming a supervisor. She worked for Bell in Toledo and several locations in Florida and California while her husband was in the US Navy Dental Corps. She married Dr. James R. Adams of Toledo on Feb. 12, 1944, while he was in his final year of dental school at the University of Michigan, and they remained married until his death from Lou Gehrig’s Disease in Dec. 1989. She was a member of Gesu Parish (Toledo) 1946-80, then became a member of St. Rose de Lima Catholic Parish (Perrysburg, OH); she was active in various women’s auxiliaries and activities in both parishes, the St. Ursula Alumnae Association and the Toledo Dental Society. She was an avid golfer and bridge player, and enjoyed traveling and the family’s summer cottage in La Salle, MI. Eileen developed Alzheimer’s Disease, which robbed her of many of her hobbies and especially her role as Grandma to her 6 grandkids & 1 great grandchild. She is survived by her son, James A. Adams of La Salle, MI; daughter, Mary E. (Kevin) Martin, of Waterville, OH; and six grandchildren: Ryan (Laura) Adams, Brendan Adams, Nicholas (Kristen) Martin, D.J. (Emily) Martin, Kelly (Jake) Phillips and Katie Martin and one great grandson, Aiden J. Martin. Friends may visit at the Coyle Funeral Home, 1770 S. Reynolds Rd. on Thursday, December 13 from 4-7 p.m. with a Rosary service at 6:30. The funeral will begin at Coyle on Friday, December 14, at 10 a.m. followed by the Mass at St. Rose de Lima church in Perrysburg at 10:30. Burial will be at St. Rose Cemetery. The family would like to thank the NWO Alzheimer's Association for their support and valuable information/resources when Eileen was diagnosed. Eileen was provided respect, dignity with the loving and professional care of the entire staff at Ohio Living Swan Creek Skilled Care Unit. Hospice of Northwest Ohio provided compassionate care and support to both Eileen and her children. Family and friends are invited to donate to the Ursuline Sisters of Toledo, Hospice of Northwest Ohio or the Northwest Ohio chapter of the Alzheimer’s Association. Please view Eileen’s memorial video tribute and leave a condolence message at CoyleFuneralHome.com.

The family of Eileen Ann Adams created this Life Tributes page to make it easy to share your memories.

Send flowers to the Adams family.