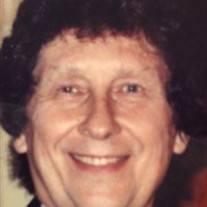 Edwin LeRoy Nazar, husband to Ann for 69 years, father to Debra, Lexie, Christine and Jennifer, and owner of Nazar Rubber Company, passed quietly away in his sleep the morning of November 10, 2018 at the age of 95 in Toledo, Ohio. Ed, as he liked to be called, was born October 19, 1923 in Cook County Chicago, IL to Gertrude and Alexander Nazar. His older sister, Loretta, described Ed as a polite and sometimes mischievous brother, who she loved dearly. The family relocated to Toledo, Ohio, when Ed was young. His father was a founder member of Toledo Industrial Rubber. Ed attended Harvard Elementary where headed a band playing saxophone. He attended Libbey High School for one year, and then transferred to Culver Military Academy in Culver, IN. He absolutely loved Culver and would tell anyone that he received most of his education from Culver. Following graduation, he enlisted in the US Army, as WWII was in full swing, serving in Italy with the 10th Mountain Division. Following honorable discharge, Ed returned home and studied Mechanical Engineering at the University of Toledo. He then joined his father’s small startup, Nazar Rubber Company, where his passion for engineering served him well. This little start up would eventually become one of the nations most respected firms in the Polyurethane manufacturing, employing 100 people. But that’s much later because, Ed’s love life would start to heat up while at UT when he met Ann, an Irish, red-headed gal with the last name of Monaghan. The two met on a blind date and three years later were married on June 24, 1950 at Gesu Roman Catholic Parish, where the Monaghans were long time members. After a Niagara honeymoon, Ed returned to help build the Nazar Rubber Company with his mother and father. While the company was growing, so did his family - Debra first, Lexie two years later, and Christine four years after that. Eight years later their final blessing arrived, Jennifer. Ed adored having five women around him, his five roses. Whether it was helping him on one of many projects in their basement woodshop, swimming at the country club, attending the opera, teaching them to dance, or watching each of them accept their college diplomas, Ed was an incredibly proud and loving father. Some of Ed’s greatest professional accomplishments were his invention of Nazarthane, becoming a Rotarian, and being elected President of the Polyurethane Manufacturing Association. As PMA President, he was very proud of winning a case against the EPA in Washington. This is a testament to how principled a figure he was, believing strongly in the fundamentals of honesty, discipline, and perseverance. Ed loved his work dearly and he also loved his wife Ann just as much. In their free time they could be found golfing at Heatherdowns Country Club or the Toledo Country Club. On Saturday nights, the couple could be found dancing or going to the movies around town. In their later years, they enjoyed taking long drives. They were best friends that never tired of each other’s company and remained deeply in love. Even at 95 years old, Ed would carefully lean down to give Ann a kiss goodnight. Ed spent his life working, but he was also an avid squash player at the Toledo Club and opera lover. Ed always showed up to family celebrations with an ample supply of fireworks to delight all. His boyish love of fireworks made the 4th of July his favorite holiday by far. He is survived by his wife, Ann Monaghan Nazar; daughters: Debra Nazar Villa, Alexia Nazar Waring, Christine Nazar, and Jennifer Nazar Marra; grandchildren: William Waring III, Anne Waring, Alexander Ronn, Victoria Ronn, Nicholas Ronn, Roman Marra, Rocco Marra; and great grandchild: Wynn Waring. Services will be held Wednesday, November 14, 2018 at Gesu Roman Catholic Parish with a viewing at 10AM, and Mass and Liturgy at 11AM. Graveside burial will follow at Calvary Cemetery. Coyle Funeral Home is assisting the family with arrangements. Please leave a condolence message for the family at CoyleFuneralHome.com. Many thanks to all the people who brought light into Ed’s life.

Edwin LeRoy Nazar, husband to Ann for 69 years, father to Debra, Lexie, Christine and Jennifer, and owner of Nazar Rubber Company, passed quietly away in his sleep the morning of November 10, 2018 at the age of 95 in Toledo, Ohio. Ed, as he... View Obituary & Service Information

The family of Edwin LeRoy Nazar created this Life Tributes page to make it easy to share your memories.

Send flowers to the Nazar family.