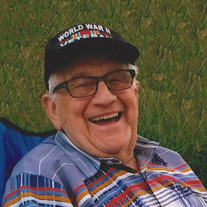 Edward H. Posluszny, 94, of Buffalo, NY, passed away on January 27, 2020. Born on July 23, 1925 Edward was the seventh of nine children born to John and Agnes Barszcz Posluszny - immigrants from Poland. His education began in Precious Blood Elementary School where he graduated at the top of his class. He then went on to Hutchinson Central High School which he left at the age of 16 in his senior year to help in the World War II War Effort. He was employed at the Bison Casting Co. – a defense plant that manufactured anchors for the U.S. Navy until March 17, 1944 when at the age of 18 he enlisted into the U.S. Army Air Corps. After his Military discharge he went back to continue his education, graduating from Hutch Tech. He went on to the University of Buffalo where he earned a Bachelor of Science in Business Administration. At U.B. he met Alice Wardynski, a fellow student, whom he married in 1950. The day after his honeymoon, Ed began work as a salesman, and later, sales manager at the Frank Wardynski and Sons Sausage Company, which he continued until he came to Toledo, Ohio in August of 2018. Ed was active in numerous activities including being one of the first investors into Tops Markets, the founding of T.V. Station WUTV Channel 29, the Peter Adamski Village, a development of low priced houses and housing for low income senior citizens, the St. Joseph Hospital and many social organizations. In 1973 the Am-Pol Eagle named him Citizen of the Year in Civil Leadership for his activities including Chairman of the Department Chair of Polish Culture at Canisius College. A fervent belief in the future of his community and pride in his Polish American heritage have motivated Edward to become one of the most outstanding leaders the community had ever known. He and his wife headed a reception committee to welcome to Buffalo Cardinal Karol Wojtyla of Poland who in 1978 became Pope John Paul II. Most recently his achievements have included the organization of the Makowski Citizens Committee, a group of bi-partisan Polish Americans who worked for the election of Stan Makowski as mayor, and serving as chairman of the MCC. Edward was a member of the Millennium Committee, the Board of Advisors of Villa Maria College, the Council of Polish Americans, the 100 Club of Buffalo, the Polish Union of American, the Frederick Chopin Singing Society, the Adam Mickiewicz Library and Dramatic Circle, the Professional and Businessmen’s Association, the Ambassadors Committee of St. Joseph’s Intercommunity Hospital, and the Canisius College Founders. Ed enjoyed the comradery and being a part of the ROMEO’s – “Retired Old Men Eating Out”, a group of retired business men of Polish decent, that gathered each Wednesday for friendship and conversation. Edward was preceded in death by his parents; his wife Alice, the love of his life for 51 years; sisters Genevieve Pantera, Estelle Ulatowski, and Helen Kensy; brothers Adalbert Posluszny and Henry Posluszny; and 2 infant siblings. He is survived by his son Edward F. (Donna) D.D.S. (Perrysburg, OH); daughter Joanne (Lars) Hoffsten (Sweden); grandchildren Katherine (Matthew) Pavlick, Elizabeth (Jon) Bald, Margaret (Peter) Cochran, Johanna Hoffsten, Alice Hoffsten; great grandsons Jack and Sam Pavlick; and sister Alice Russ. Visitation will be held on Friday, February 7, 2020 from 4 – 8 p.m. at Pacer Funeral Home, 2275 George Urban Blvd., Depew, NY, 14043 where a Scripture Service will begin at 7:00 p.m. Services will be held at 12:00 p.m. on Saturday, February 8 at St. Aloysius Gonzaga Roman Catholic Church, 157 Cleveland Dr., Buffalo, NY 14215 where the family will greet guests starting at 11:00 a.m. Entombment will follow in St. Stanislaus Cemetery in the Resurrection Chapel. A Memorial Service is pending at Ohio Living Swan Creek Retirement Community in Toledo, Ohio. Memorial contributions may be made to St. Aloysius Gonzaga Roman Catholic Church, or to Ohio Living Swan Creek, 5916 Cresthaven Ln., Toledo, OH 43614. Coyle Funeral Home in Toledo, OH is assisting the family with arrangements. Please view and sign the online guest registry at www.coylefuneralhome.com

Edward H. Posluszny, 94, of Buffalo, NY, passed away on January 27, 2020. Born on July 23, 1925 Edward was the seventh of nine children born to John and Agnes Barszcz Posluszny - immigrants from Poland. His education began in Precious Blood... View Obituary & Service Information

The family of Edward Harry Posluszny created this Life Tributes page to make it easy to share your memories.

Send flowers to the Posluszny family.