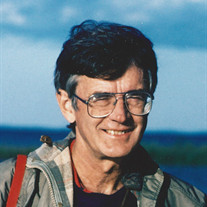 Edson Austin Whipple, 86, former managing editor of The Blade, died Sunday, July 22, 2018 in Swan Creek Health Center where he had been under hospice care for several days. He had undergone surgery due to complications after a fall at his Old Orchard home. Throughout his decades-long career, Ed was the consummate newsman who believed in an obligation to hold office holders accountable for their actions, and he never hesitated to challenge them when he sniffed out possible misdeeds, backdoor deals, or general disregard for the public interest. His persistence and doggedness were quickly recognized in the halls of the Ohio state capital, where he covered the state legislature for The Blade from 1965 to 1968. His love of the news business began at the University of Michigan, where he earned a Bachelor of Arts degree in journalism in 1953. He managed to combine that with another love when he became sports editor for the Michigan Daily in 1952-53, and those twin pursuits and passions carried him throughout his life. While still an undergraduate, Ed met his soon-to-be wife, June Larson, a nurse, on a blind date in Detroit, and a draft notice from the Army in the summer of 1953 took the couple to Fort Riley, Kansas, where he served as a public information officer. They returned to Ann Arbor in 1955, and Ed completed a master’s degree in journalism at U of M two years later, winning the McNaught Medal for excellence in graduate studies. He worked for the U of M news service while earning his advanced degree and was hired by The Blade in 1958. Investigative reporting efforts later brought him awards from the Ohio Associated Press, the Ohio Legislative Correspondents Association, and the Northwest Ohio Society of Professional Journalists. Born in Detroit’s Henry Ford Hospital in 1931, Ed graduated from Plymouth High School in 1949. As a son of engaging and active parents, he came by his competitiveness and political interests honestly. His mother, Ruth Huston Whipple held two University of Michigan degrees, was an English teacher and debate coach, and was elected mayor of Plymouth in 1940 — the first woman in Michigan to hold that office. She began her career in public office in 1930. His father, Austin Whipple ran Huston and Co. Hardware, the family business. In Ed’s nearly 33 years at The Blade, he was often called on to head special projects after returning from Columbus, all culminating in his appointment as managing editor in 1985. He also brought his newspaper experience to academia, teaching journalism courses part-time at the University of Toledo in subjects such as media law, contemporary affairs, news interpretation, news writing, reporting, and editing — an endeavor he continued 15 years after retiring from the newspaper in 1990. He served several years as adviser to UT’s campus newspaper, The Collegian. For many years he also appeared on the weekly presentation by WGTE-TV public television of Roundtable, an interview format in which he and typically a second reporter questioned local public figures involved in topical issues of the day. As a reporter, editor, and mentor, Ed was considered by younger reporters as the gold standard for tough and fair reporting and professional integrity. He brought his ever-present skepticism to the table and could find the questions that less experienced staffers managed to overlook. Beyond his news career, Ed found time for a wide range of interests, none more central than University of Michigan athletics. He was a season ticket holder for Wolverine football games for decades, through thick and the more recent thin. He also managed to take in almost all home games in basketball and softball. He followed the U of M hockey team at home and away— most recently attending the NCAA hockey tournament in Worcester, Massachusetts in March. And Ed wasn’t a mere sports bystander. He and his brother grew up playing tennis on the clay court their father built. He played on a variety of ball and hockey teams over the years, and skated with senior-level hockey teams in Ann Arbor into his early 80s. As a hockey player, he was never afraid to go into the corners and, even away from the rink, always heeded Red Green’s admonition to keep your stick on the ice. Ed was a skilled carpenter as well, helping build the cottage on Mullett Lake as a favorite refuge the family has enjoyed for decades. He and June traveled widely in their retirement, across the United States and in Canada, Mexico, Europe, Iceland and Scandinavia. He especially loved northern Michigan and the American West. As an amateur photographer with an eye for nature’s beauty, Ed documented the family travel adventures in meticulously kept computer files. Ed enjoyed classical music, often attending Toledo Symphony concerts and musical events at Hill Auditorium in Ann Arbor or wherever his travels took him. His musical appreciation went beyond classical to include big band, Dixieland, boogie woogie, blues and anything played by the Michigan Marching Band. Ed is survived by wife, June; brother, Elmer (Hilma); a daughter, Mary Ann Whipple; son, Edson and his wife, Rebecca, of Phoenix; grandchildren, Thomas and Erik; sisters-in-law, Janet (the late Charles), Mary (Frank), and Karol (Lee); his nephew and nieces. A memorial service will be held Sept. 21 at the Ward Pavilion at Wildwood Metropark. The family suggests that tributes be in the form of contributions to the Committee to Protect Journalists (330 7th Avenue, 11th floor, New York, NY 10001); Hospice of Northwest Ohio (30000 East River Road, Perrysburg, OH 43551); or an organization of the donor’s choice. Coyle Funeral Home is assisting the family in arrangements. Please leave a condolence message for the family at CoyleFuneralHome.com.

Edson Austin Whipple, 86, former managing editor of The Blade, died Sunday, July 22, 2018 in Swan Creek Health Center where he had been under hospice care for several days. He had undergone surgery due to complications after a fall at his Old... View Obituary & Service Information

The family of Edson Austin Whipple created this Life Tributes page to make it easy to share your memories.

Send flowers to the Whipple family.