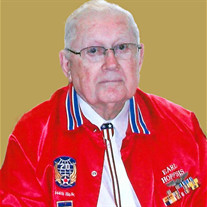 Earl W. Hoffsis, 93, of Toledo, Ohio passed away on February 20, 2018. Earl was born April 18, 1924 to Winfield and Mable Hoffsis. He graduated from high school in North Baltimore, Ohio and then entered the United States Army Air Force. He flew many missions over China, Burma, and India. He survived the dangers many of his co-flyers did not. After the war, Earl joined the Perrysburg Police Dept., and went to night school to further his math skills towards a position as an engineer. He was instrumental in developing a variety of products for the auto parts manufacturer, Sheller Globe Corp. From the moment Earl left the armed services he wrote numerous, important papers, plus a monthly newsletter for The China, Burma, India (CBI) Veterans organization in Toledo. His writings are still a valuable tool today for research historians who need original works. The University of Toledo’s Carlson Library acquired all of his original documents several years ago and they now can all be studied on the library’s website. He was a longtime member of the Vernon McCune American Legion Post 132. Further, Earl was always a dedicated church worker. He was the treasurer, the bookkeeper, and could be found handling the other business facets no one else wanted to do. The last several years, Earl, in his retirement, has discovered Angels Landing Spiritual Center. Here, he found that he could simply relax and enjoy the many spiritual gifts given to him. Earl was preceded in death by his parents, siblings; Howard, Roger and George Hoffsis, Grace Hogan, Helen Bretz, Elaine Toth Courtney. He is survived by a brother, James Hoffsis and his close friend of 57 years, Richard. Friends may visit at the Coyle Funeral Home, 1770 S. Reynolds Rd. on Friday, February 23 from 3:00-8:00 p.m. where a 7 pm American Legion post ceremony will take place. Funeral Services will be held Saturday, February 24 beginning at 1:00 p.m. in the funeral home and interment, with full military honors to follow at Toledo Memorial Park. In lieu of flowers, please consider a contribution in Earl’s memory to Angels Landing Spiritual Center, 2400 N. Reynolds Road, Toledo, OH 43615 Please view and sign the online guest registry at CoyleFuneralHome.com

The family of Earl William Hoffsis created this Life Tributes page to make it easy to share your memories.

Send flowers to the Hoffsis family.